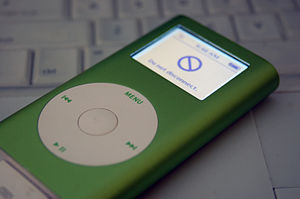 Several improvements have been made to the new iPod Mini. Both iPod Mini models feature a better 18 hour battery. This should be good news considering battery life has been a common complaint against the iPod.

In an effort to cozy up better with PC users, the iPod Mini can now charge and sync via one simple USB 2.0 cable. No more FireWire.

Our friends at iPoditude.com report that “The Mini armband will be available in five new colors (grey, orange, yellow, blue, and pink) in addition to the existing black one. These fancy blood pressure monitor cuffs will be shipping in 5-7 weeks for $29. Wouldn’t it be a good idea to add some reflective material on them for added visibility at night when jogging or during drunken stumbles?

Apple also announced a new iPod Mini lanyard. This device looks pretty handy but details are scant. It attaches to the dock on the bottom and has an adjustable length lanyard… It ships in 5-7 weeks and will run $19.”

As always, you can get a free laser engraving on your iPod if you purchase it from the Apple Store. Just be careful what you ask to get engraved. Apple has a history of rejecting certain engravings (Article: Rejected iPod Engravings). Think it through ahead of time, your engraving is limited to two lines of text with a maximum of 23 characters per line.

Both the 4GB and 6GB models are available in the following colors: silver, pink, blue or green.

As of today, the new iPod lineup consists of the following:

Clever iPod Shuffle Sticker Looks Like A Small Pack Of Gum
Next Post:Apple to Buy TiVo?