As expected, Nintendo announced another $50 price cut of its Nintendo Wii game console this week. The newly priced Wii system will cost only $150 and come in either black or white with a “Mario Kart Wii” game and a Wii Wheel accessory. This replaces the previously bundled “Wii Sports” and “Wii Sports Resort” games. The cheaper Wii bundle goes on sale May 15th. 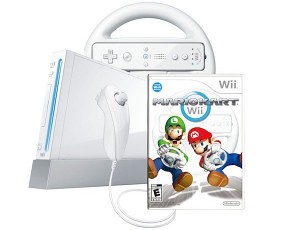 Clearly Nintendo is attempting to maximize sales of the origional Wii hardware before launching a new system later this year. There’s still no word on when the next version of the Nintendo Wii, or the Wii 2, will be released. But if we had to place a bet, it would be right before Christmas.

What do you think?