Nobody Lives Here: The Zero Population Blocks of The United States

Hate your nosey neighbors? Tired of sitting in rush hour traffic? Want more space? Perhaps you should start looking at property near some of the zero population blocks from the 2010 US Census.

Hate your nosey neighbors? Tired of sitting in rush hour traffic? Want more space? Perhaps you should start looking at property near a zero population blocks from the 2010 US Census.

According to 2010 census, over 310 million people currently live in the United States. But surprisingly, 47% of the country remains unoccupied. Pretty crazy right?

Before each Census, the U.S. Census Bureau divides up the country into blocks. The United States currently consists of 11,078,300 Census Blocks. Of them, 4,871,270 blocks totaling 4.61 million square kilometers were reported to have zero population. That’s right, almost 5 million census blocks have zero population.

Let’s take a look at the map: The Green shaded areas indicate unoccupied Census Blocks. Just a single inhabitant is enough to omit a block from shading. The White blocks are populated areas. 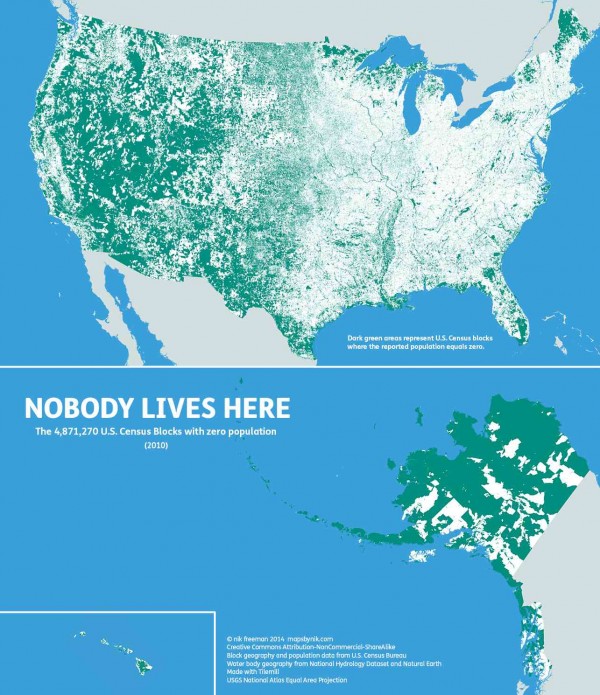 Why is so much of the United States empty? Most of the areas are physically impossible to inhabit. For example, it’s difficult to build a house in mountains, lakes, glaciers, rivers or deserts.

Special thanks to mapsbynik for making this map. Please visit mapsbynik for more info and some interesting theories. For example, why is northern Maine and the border between the the Dakotas are so void?