May 22, 2009 by Melissa Kondak
FacebookTweetPinLinkedIn

It was a response to Limbaugh’s challenge that the left-leaning cable channel not talk about him for a month, since “MSNBC is hoping to build its ratings on my back,” the radio talk show host said.

Their feud is one of two media tiffs that have broken out in the past few days, this one slightly less odd than Glenn Beck arguing with Barbara Walters and Whoopi Goldberg of “The View” over seats on an Amtrak train to Washington. 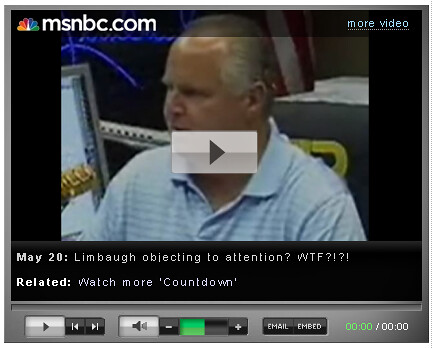 Limbaugh, who has increased his already high profile as an insistent voice of opposition to the Obama administration, said he wanted to see if MSNBC could go on “Rush withdrawal.”

“Thirty days without anything mentioning me,” Limbaugh said on his show Tuesday. “No video of me, no guests commenting on me. See if you can do it. You know, stand on your own two feet. Stand on liberalism. Stand on what you believe. Stop bleeding off me.”

Olbermann said Wednesday night that Limbaugh had “suddenly gone all Greta Garbo on us. He wants to be left alone. He has surrendered.”

“Suddenly, the impact of being accurately called out, day after day, hour after hour, as a faux-populist, press-release regurgitating lackey of repressive and regressive political flunkeys have hit bone,” Olbermann said.

US Soldier Fights Taliban While Wearing Pink Shorts
Next Post: Why Is NBC Universal Rebranding The Sci Fi Channel To SyFy? (2009)