Astronomers have spotted a space oddity in Earth’s neighbourhood – a dead star with some unusual characteristics.
The object, known as a neutron star, was studied using space telescopes and ground-based observatories.

But this one, located in the constellation Ursa Minor, seems to lack some key characteristics found in other neutron stars.

Details of the study, by a team of American and Canadian researchers, will appear in the Astrophysical Journal.

If confirmed, it would be only the eighth known “isolated neutron star” – meaning a neutron star that does not have an associated supernova remnant, binary companion, or radio pulsations.

The object has been nicknamed Calvera, after the villain in the 1960s western film The Magnificent Seven.

“The seven previously known isolated neutron stars are known collectively as The Magnificent Seven within the community,” said co-author Derek Fox, of Pennsylvania State University, US.

“So the name Calvera is a bit of an inside joke on our part.”

The authors estimate that the object is 250 to 1,000 light-years away. This would make Calvera one of the closest neutron stars to Earth – and possibly the closest.

Neutron stars are one of the possible end points for a star. They are created when stars with masses greater than four to eight times those of our Sun exhaust their nuclear fuel, and undergo a supernova explosion.

This explosion blows off the outer layers of the star, forming a supernova remnant. The central region of the star collapses under gravity, causing protons and electrons to combine to form neutrons – hence the name “neutron star”. 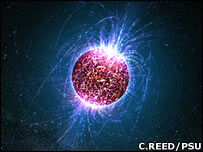 You Have To Watch This Incredible Finnish YMCA Song Cover From 1979
Next Post:‘Punk’d’ Gets Shot at Syndication