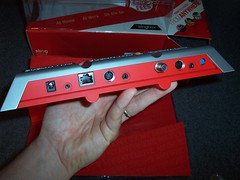 Most of us simply accept that when we go on vacation, the TV programming we watch in our living room is inaccessible. Most of us understand that when we’re not at home, we can’t watch the premium channels we pay for. Apparently, most of us are lacking in imagination.

It’s not a new concept, but Sling Media has packaged it up real nice, simplified it and given it a name: “Placeshifting” technology grabs your television signal and sends it anywhere in the world. Find out how the Slingbox lets you “take your TV with you.”

Slingbox is a set-top box that connects to your TV (or any other video-output device) and streams the signal to another machine in real-time — there’s no recording involved. This machine might be your computer in your home, in which case Slingbox streams the signal via your home network. It might be your Web-connected laptop or cell phone located anywhere in the world, in which case Slingbox streams the data via the Web. You can control the video that appears on your screen just like you were watching from home.

Slingbox works in conjunction with the SlingPlayer software you install on your computer. Together, they “sling” NTSC video data to another location. It works with regular TV, satellite TV, cable TV, a DVD player, DVR or camcorder. If it’s NTSC (the video broadcast standard in the United States), you can sling it. Sling Media will release a PAL/SECAM-standard Slingbox in 2006 (PAL and SECAM are the dominant standards outside the United States). See How Video Formatting Works to learn about NTSC, PAL and SECAM formats.

The coolest part of the Slingbox setup is that you can fully control the video source from your computer. The SlingPlayer has thousands of remote-control codes built in, and you can chose a virtual remote that looks just like the remote sitting on your coffee table.

Sitting in your office or in a WiFi coffee shop on the other side of the world, you can change the channel on your TV, fast forward through programs on your TiVo and adjust the contrast of your TV picture. There are no subscription fees, just a one-time purchase price for the hardware and software. You can install the SlingPlayer software on as many devices as you want, but only one device can access the Slingbox at a time.

To sling your TV programming, you need the following equipment in addition to the Slingbox:

For those who just can’t get enough TV, this is basically one of the coolest gadgets in the world.