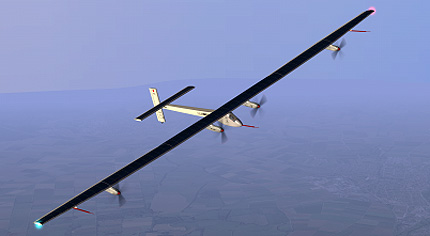 From concept to construction, the Solar Impulse has been hailed as a savior—the first major attempt to fly a plane without fuel, with eco-eyes set on a sun-powered trip around the globe. And for record-setting adventurer Bertrand Piccard, whom we profiled in a cover story on the aircraft two years ago, Monday’s unveiling of its prototype was a long time coming: He showed off a mock-up of the Solar Impulse at the 2005 Paris Airshow, but now the 201-ft. plane is set for a test flight next fall.

Coming from a long line of adventurers, Piccard made a pioneering, round-the-world flight in a balloon in 1999. His aircraft, a hybrid helium/hot-air balloon called the Breitling Orbiter, was developed by a consortium of engineers and companies, including the European Space Agency. Piccard applied that same model to the Solar Impuse, with some 150 designers across six countries trying to get it off the ground for next year, then a 2011 transatlantic flight and beyond.

“I’m not the type of man who accepts that there is no more adventure,” Piccard told us then. “Everything in this airplane needs to be 100 percent optimal—the energy chain, the aerodynamics, the fabrication of the structure, everything.”

The $94-million Solar Impulse prototype weighs in at just 3300 pounds thanks to its carbon-fiber body, but has to compensate for the still-developing world of solar cells by sprawling panels across its huge wingspan. The cockpit will only have room for one pilot, and it’s filled with avionic nstruments, computers and vacuum-packed food. Meanwhile, Bertrand and Co. have designed Solar Impulse to fly for 36 hours at a maximum altitude of 27,000 ft.

Under the hood, the plane draws solar power during the day and stores it in batteries to fly at night. But even the world’s best solar plane can only soar for seven or eight hours during the day—when the sun is high enough to provide sufficient energy.

FacebookTweetPinLinkedIn
Tag: Airports
Previous Post:Why Would You Ever Go to Antarctica
Next Post:PBS Downloads Now Available Legally Via BitTorrent And Vuze (2007)