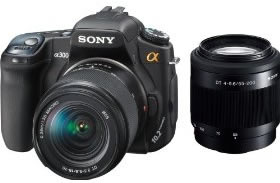 You might think that in the current economic climate, spending money on a high-end digital camera would be a luxury that most people couldn’t justify.

After all, millions are being lost on Wall Street and in the city every day. High street sales are down, jobs are being lost and nobody is spending money on anything. How on earth could you think about trading up that little point and shoot camera for something serious?

Well, here’s the good news. Sony has come to the rescue of your wallet with this, the Sony Alpha A300 – which is available online for a mere £330 including an 18-70mm lens. Now that is a super price for a digital SLR especially one that includes a live preview mode. And you know what? It’s just perfect for some credit crunch-busting fun.