The Big Tent Makes a Big Splash at the DNC 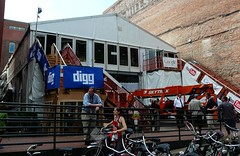 For the past few months, bloggers have been buzzing about the “Big Tent” at the #DNC08. Well, now that America’s Democratic National Convention is underway, we finally got to see the Big Tent in action. The Big Tent is a facility for the alternative media hosted by DailyKos, the Sustainability Alliance and ProgressNow, with Digg, YouTube, and Google as corporate sponsors.

The two-story tent was made available for alternative and indy journalists and bloggers who didn’t have a home base to report from for the political conventions. Everyone from small town soccer moms to Craig Newmark, founder of Craigslist, is blogging from the Big Tent in Denver.

The Big Tent is very luxurious compared to dirty cramp press rooms frequented by traditional press. Journalists and bloggers who signed up for a slot in the 8,000 square-foot facility get unlimited access to WiFi, phone/iPod/laptop charging stations, yoga classes, 10 minute massages, smoothies, comfy couches, a baby changing area and live entertainment. Oh yeah, food and drinks are included as well and the free beer starts at 1pm. The Big Tent is even handicapped accessible. I wouldn’t be surprised if some traditional journalists decided to work “off site” in the Big Tent and avoid the skanky press rooms all together. 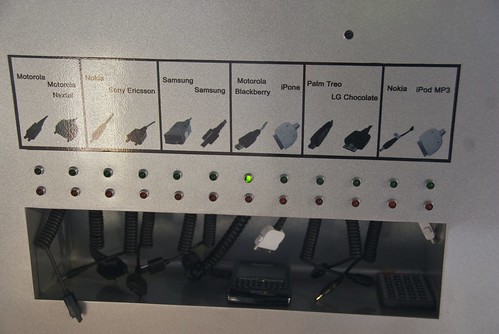 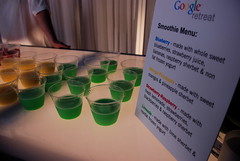 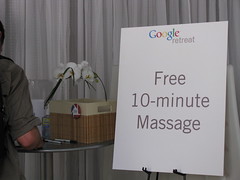 At only $100 a pop, the Big Tent won’t make back their total investment, let alone profit off of the 500 bloggers who booked time in the facility. So what do sponsors like Google gain by providing Big Tent services to bloggers? First of all, Google is getting a lot of exposure and press (this article included). Google also gets to promote their software and services, like Google Docs, Picasa and Blogger, to influential journalists and bloggers. Google has even included a kiosk in the public area of the tent where anyone can post videos on YouTube. Google will also have a major presence at next week’s #RNC08 and demo some real time video search tools. 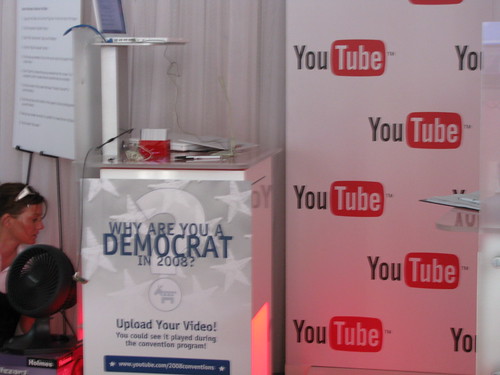 This year, the Democratic National Convention has credentialed more than 120 blogs but that’s not nearly enough. People aren’t content being spectators anymore, they want to participate using Internet tools like Twitter, blogs and YouTube. The privately funded Big Tent is meant to handle the overflow but it’s already overflowing.

With MSNBC’s facility down the street from the Big Tent, it will be interesting to compare mainstream versus alternative journalism’s location facilities.