How To Survive A Long-Term Power Outage Or Blackout (Are You Ready?)

This guide aims to give some pointers to help you prepare your home for the next power outage and to help keep you and your family safe during the next power blackout.

When a major power blackout hit New York City in 1977, it resulted in widespread looting, vandalism and violence. In comparison, the massive 2003 power outage that disrupted electricity to 50 million people across Ontario and eight U.S. states for up to four days was more a severe headache than an occasion to run wild. Still, it brought a new level of awareness to millions — that being prepared is not so much a crazy survivalist notion as a common-sense necessity.

It’s important to be prepared at all times, but especially during the summer months — the so-called “blackout season” runs from the middle of the summer (mid-July) until the end of September — and in the dead of winter when ice storms can bring down power lines.

From hurricanes and fires to unpredictable failures in the electrical grid, your lights will eventually go out. The only question is for how long? #PowerOutage #Blackout #HowToSurvive

This guide aims to give some pointers to help you prepare your home for the next power outage and to help keep you and your family safe during the next power blackout.

You think ahead for any situation, so you already have an emergency kit ready, right? If not, the U.S. Government has some suggestions for a basic survival kit:

Tip: Think about your pets (more water as well as food for them), people with special dietary needs and anyone requiring medication such as insulin. Make sure you have supplies handy.

Prepare Your Home For A Power Blackout 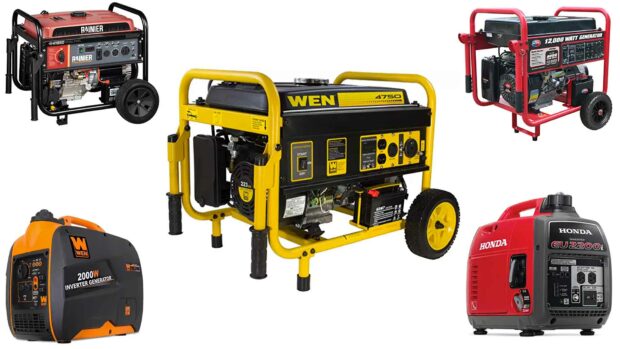 If you can afford it and you have the room, portable power generators can be a nice bit of insurance. The recommended use is to run an extension cord from a portable power generator (running outside, of course), to a power strip in your home. The plug in a few basic necessities. Think lights, fans and maybe a fridge — don’t expect to power your whole home off of one of these. For an even safer usage consider having a manual transfer switch wired into your home’s electrical system. Keep gasoline handy or that portable power generator won’t be doing anything but sitting there mocking you with visions of what might have been.

If you don’t have the room, budget or inclination to go full hog with the backup generator, many companies offer inexpensive portable battery backup devices that will add another 3 or 4 hours run time to a laptop computer or power a fan or light for a night. Some of these can even be recharged via solar panels.

Tip: Portable emergency generators can be very popular items during an extended power outage — a little too popular, if you catch our drift. Consider chaining yours to a solid object to make it a less tempting target.

What To Do When The Power Goes Out

Campers And RVs Will Give You An Advantage

If you, or someone in your household, is a camper, chances are that you’ll have a foot up on the neighbors during a blackout. Just make sure your gear is in good shape, accessible and ready to go (ie., fuel and/or batteries available where appropriate). A few basic camping supplies that may come in extremely handy during a blackout include:

Tip: Keep your camp stoves, propane stoves, lanterns and BBQs outdoors, not in the house. If the carbon monoxide doesn’t kill you, there’s a decent chance that the flames might catch on something and burn the house down.

Things You Should Not Do During A Power Outage

North America has been well served by its electrical grid for about 125 years, and for the most part, everything’s been hunky dory. However, if there’s one thing that experience has taught us, it’s that the more reliant we are on electricity, the more it hurts during those rare occasions when it’s gone. Don’t debate “if” you will experience a long-term power outage. Instead, shift your mindset to “when” you’ll experience an extended power blackout. From hurricanes and fires to unpredictable failures in the electrical grid, your light will eventually go out. The only question is for how long?