Time Warner Falls Into the Red 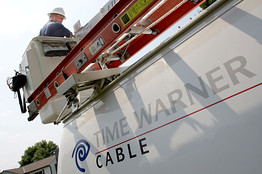 The cable business, in which Time Warner holds an 85% stake, also saw its subscribership decline during the quarter, though revenue rose.

The drop in subscribership may feed concerns that the economic downturn and pullback in consumer spending is weighing more heavily on the cable industry than was previously thought.

Goldman Sachs analyst Ingrid Chung said Time Warner Cable had warned of a significant subscriber slowdown, but said the fourth-quarter weakness was “even worse than lowered expectations.” She said the company may have decided to sacrifice subscriber growth to meet its earnings guidance.

Meanwhile, Chief Executive Jeff Bewkes said the separation of Time Warner Cable would occur “soon,” but didn’t give any further timeline. The media giant has been planning for some time to give its stake of the cable business to Time Warner shareholders.

The company disclosed the write-downs last month, with about $15 billion of it reflecting cable-franchise values. Other write-downs reflected the declining values of its AOL and magazine business. The company at the time cut its 2008 view amid the weak ad environment.

Media stocks continue to be battered by worries about declining advertising sales and uncertainty over the transition to digital content. Time Warner shares are down 40% since September and are slightly above multiyear lows.

Time Warner on Tuesday projected 2009 earnings excluding its cable operations, as well as certain costs, of 66 cents a share. Analysts were on average expecting earnings of 99 cents, though a company spokesman said some estimates may still include the cable operations.

AOL revenue at America Online fell 23% amid a 18% drop in ad revenue. U.S. dial-up subscribership fell another 26%, putting the figure at 6.9 million. AOL said last month it would lay off about 700 employees, or 10% of its work force, as the sharp decline in ad spending continues to pressure its transition from an Internet-service provider to an advertising business.

Time Warner has also been cutting payroll elsewhere, including 800 jobs in its movie division and more than 500 jobs at Time Inc.

Profits at Time Warner’s television business, which includes Turner Broadcasting and HBO, slid 20% amid 8.7% revenue growth, including 10% from ads. Movie earnings increased 7% despite an 11% drop in revenue. Analysts and investors are closely watching the results of the television networks and movie studio to see to what extent they can carry the load in the dismal economy.

Time Warner Cable, the nation’s second-largest cable operator behind Comcast Corp., swung to a net loss of $8.2 billion, or $8.36 a share, compared with year-earlier net income of $327 million, or 33 cents a share. Excluding its share of the write-down, earnings were 35 cents. Revenue rose 7.7% to $4.4 billion.