Want to get the scoop on other journalists? Forget hitting the streets and working your sources over the phone. Who has time for all that? If you want an exclusive, then you need to work in real time. Say hello to your new real time monitoring service: Twitter.

Snooki got arrested at the Jersey Shore. Not a huge surprise. But what’s special about this incident is how social media was used as a news gathering tool to break the story.

Ryan Satin from TMZ got the scoop on Snooki‘s July 2010 arrest at the Jersey Shore just by listening on Twitter and talking to people who saw it happen. Remember most people these days have a smartphone capable of taking photos, recording video and sharing content on social media.

Want to get the scoop on other journalists? Forget hitting the streets and working your sources over the phone. Who has time for all that? If you want an exclusive, then you need to work in real-time and use social media as part of your newsgathering efforts. Say hello to your new real-time monitoring service: Twitter.

This tutorial will walk you through the basics of using Twitter to search for news items.

Download/Sign Up for a robust Twitter client like Hootsuite (awesome), CoTweet (meh) or TweetDeck (yuck!). These services will allow you to search faster, save searches and discover social updates that you can use in your story. 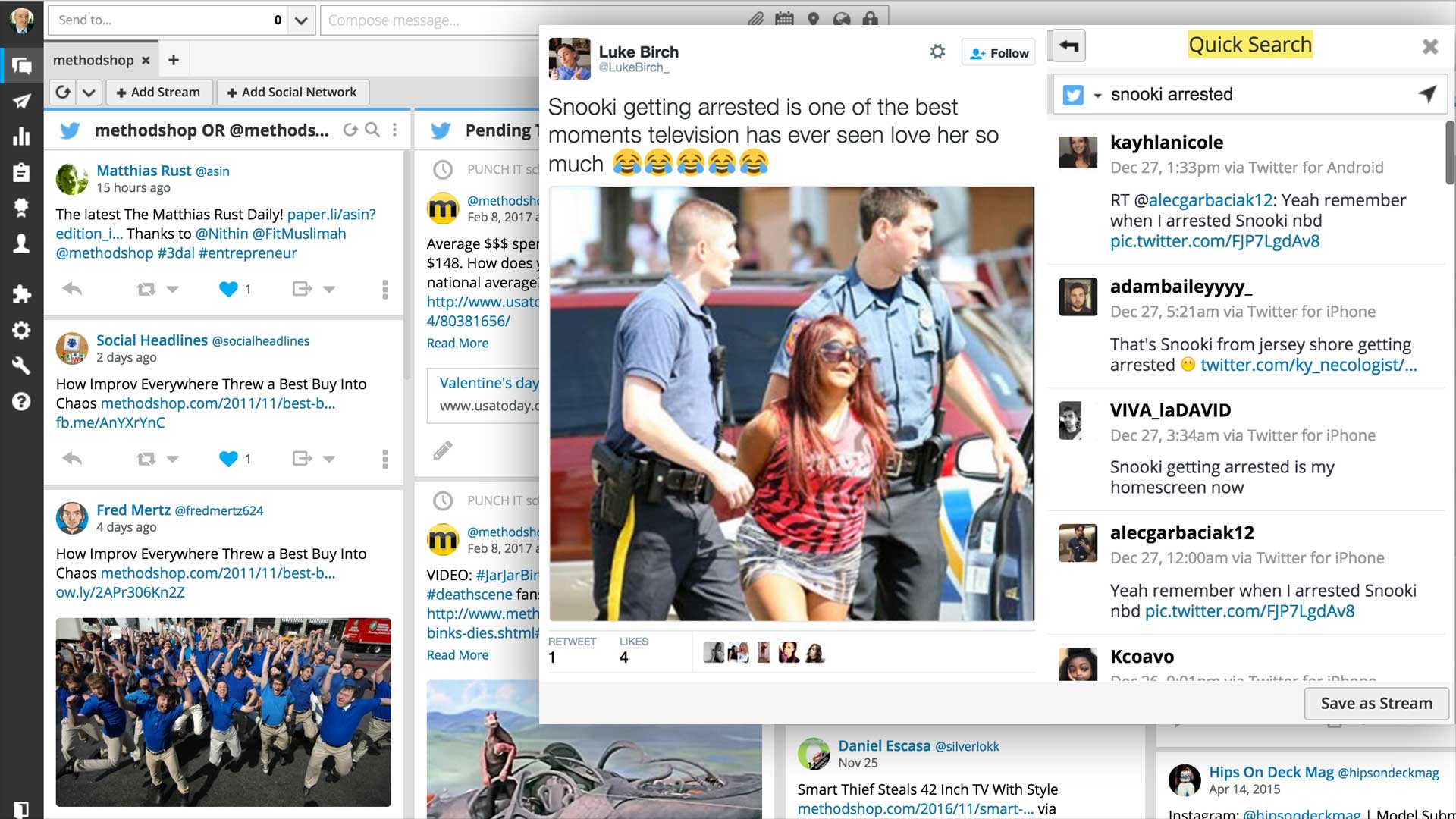 Wait for some news to happen… like Snooki getting arrested while filming Season 3 of MTV‘s hit show the Jersey Shore.

There are millions of smartphones around the world. Immediately start listening for story-specific keywords on Twitter. For example, run search queries like “saw Snooki arrested.” Your goals are to identify a witness, get the additional information and obtain photos and video. Adding words like “saw” and “arrested” will help you narrow your search. 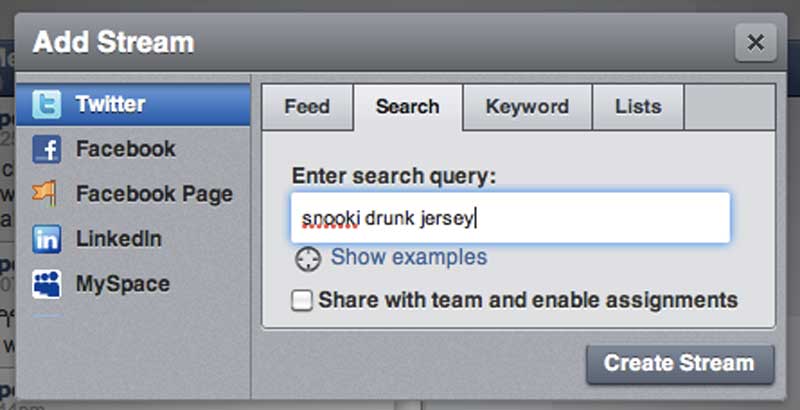 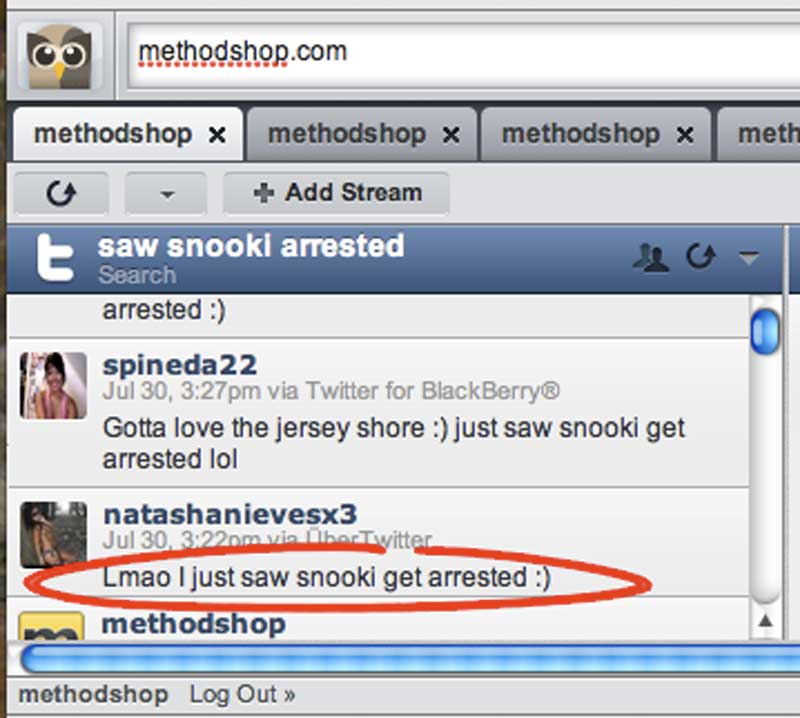 Pull up their Twitter accounts and make sure the witnesses are legit. Check out their previous tweets. They might tell you more about your witnesses and their whereabouts before the incident. Three hours before Natashanievesx3 saw Snooki get arrested (view tweet), she used TweetPhoto to post a picture of Snooki (view tweet). That puts Natashanievesx3 at the scene with Snooki. Witness confirmed.

Start @replying to your witnesses on Twitter and find out if they have any pictures, video and more information. Data. Data. Data. You can’t make bricks without clay. Here’s a series of tweets between @RyanSatin from TMZ and our witnesses Natashanievesx3 and Spineda22. 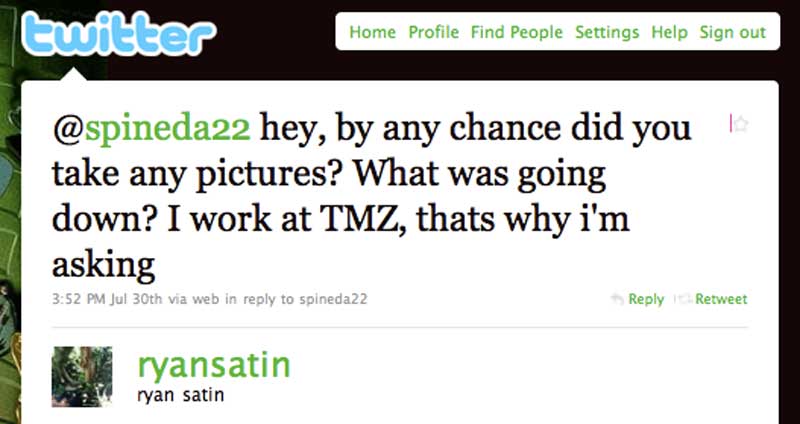 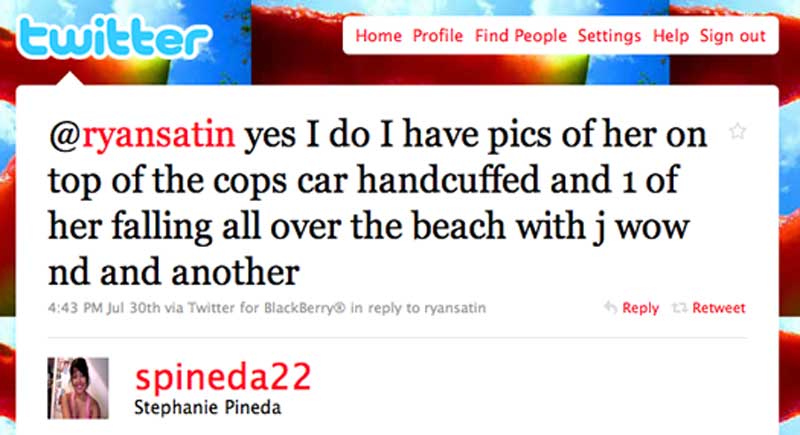 Ask your witnesses to follow you so you can direct message them on Twitter or take your conversations offline. You probably don’t want to start exchanging email addresses, phone numbers or negotiating prices publicly over Twitter. Then buy their media, get statements and publish your exclusive story.

08) Congrats on Your Exclusive!

That’s how @RyanSatin, Senior Producer at TMZ, used Twitter to get the exclusive on Snooki’s arrest. Nice work Ryan! BTW that’s Ryan on the left in the picture below sitting next to his boss, Harvey Levin, founder of celebrity news website TMZ.

Sad Keanu Meme Inspires Photoshop Artists Across The Internet
Next Post:Bed Intruder Song by Antoine Dodson and The Gregory Brothers