Which Twitter account will belong to the next President of the United States? Will it be @barackobama?

Twitter’s CEO, Biz Stone, anticipates record-breaking activity on Twitter all day on election day. Barack Obama is currently the #1 person on Twitter with over 110,000 followers, so expect a heavy turnout of his Twitter supporters. John McCain’s supporters tend to be less online savvy. His Twitter account has a little over 4k.

After you vote (don’t forget), you can monitor live US Election activity on Twitter here: http://election.twitter.com/ 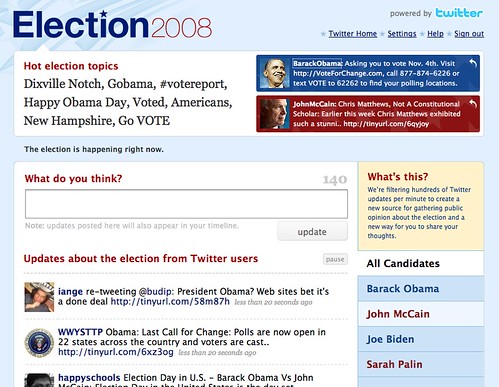 If you’re still not sure what Twitter ius all about, here’s a 101 primer on Twitter and tips on how to explain it. Tutorial: How to Explain Twitter to Your Grandma