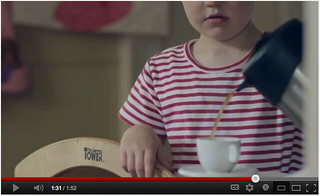 So, you haul your old DV cam to shoot your kid’s school production of The Princess and the Pea. You’re so busy fussing with the buttons, checking the charge of the battery and rewinding the tape, you miss her stage entrance! Then you get the tape home, hook it up to the computer, need to download driver updates, get e new hard drive (yours if full) and when you finally finish, the video is 23 minutes long, the only thing you hear is the woman sitting next to you complaining about the staging, and it’s shaky enough for more than one person to ask, “how much did you have to drink that night?”

Sure, the Princess and the Pea is okay, but does it really capture WHO your child is? Enter UnDirectable. The brain-child of creative director, graphic designer, photographer, filmmaker and father of three, Jim Read, unDirectable creates uncommonly cute and shareable kid-films. Jim has worked on advertising campaigns for hit TV shows and he has designed and animated titles for films and commercials. Taking his passion for storytelling and working with his own kids, Jim has been creating “ridiculously” fun kid-films optimized for sharing through social media.

“We aim for a film that’s under a minute,” says Read. “We’ve learned that’s about how much time friends and family are willing to put in, and it lets us focus on keeping only the best material.” The unDirectable team currently shoots with high-end DSLRs, that when lensed, lit and framed properly produce incredible results, rivaling TV and film.

The name “unDirectable” comes from the idea that kid’s can’t or won’t take direction. Read has learned, with his own kids, how to get on their level and work around many of the challenges. “When we shoot, we roll with the punches because kids don’t always take direction. We go in with a framework for a concept and ideas for shots and coverage we want to get, but we have to be flexible. We’ve always been able to stitch an engaging story together, even when the shoot doesn’t go as planned.” Much of the storytelling is crafted in an edit session, where picture and sound come together. “Take for example, ‘Fake Smile’ . Ben isn’t the strongest interview subject, but we were able to get some amazing looks and reactions from him, holding on those shots for just a bit on the long side which just makes it funny!”

Delivery is an HD mp4, DVD or BluRay, covering just about any need. “We think HD mp4’s are great because if the shareability factor – it’s easy to upload to Vimeo or YouTube and post a link on Facebook. This is what we recommend.”

So what’s next? “We’re not giving up our day jobs, but we’re committed to having fun and helping families capture and share the gold that comes from kids.”

Cleaning Lady Caught On Camera Vacuuming Nothing
Next Post:6 Reasons to get Mac AntiVirus Software