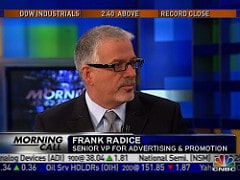 Poor NBC. They’ve fallen from Warren Littlefield‘s “Must See TV” era to Must Flee TV. Viewers have been avoiding NBC’s primetime lineup like Kryptonite. Every year NBC’s rating have gotten worse, but last month, NBC sunk to a new all time low… they were beaten by the Spanish language station, Univision.

So Frank, being the consummate promo guy, co-wrote and even did the voiceover for this English language version of the “Univision beats NBC” proof of performance spot. The promo has already gotten over 10,000 views on YouTube.