What Do the Olympic Rings Symbolize? [pic] 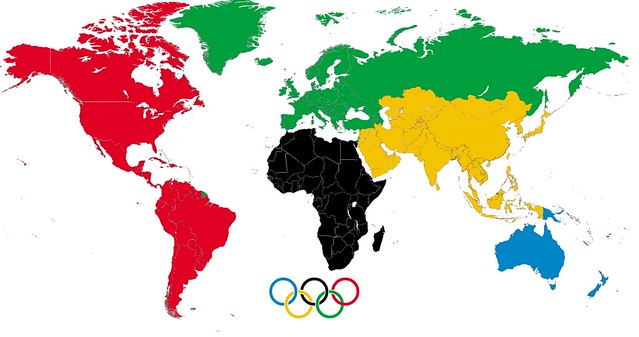 Have you ever wondered why there are 5 olympic rings and what the colors symbolize? The meaning isn’t exactly black-and-white…

The rings of blue, black, yellow, red and green, which make up one of the most recognized symbols in the world, traditionally represent the 5 different areas of the world involved in the Olympics (North and South America are considered one area, along with Africa, Australia, Asia and Europe).

But the 6 colors, if you include the white background in the Olympic flag, were intended to represent the various colors seen on the flags of nations competing in the Games of Olympiads I, II, III, IV, and V. And historian David Young says it is likely that these rings could also symbolize the previous 5 Olympiads completed prior to 1914.

Each color does not correspond to a specific continent, as is commonly thought; besides, there are technically seven continents on Earth, not five.

“It is a true international emblem,” wrote Pierre de Coubertin, founder of the Modern Olympic Games, in 1913. He spoke of uniting the different regions of the world, not the different continents.

The 1928 St. Moritz winter games in Switzerland were the first to display the Olympic rings on the official Olympic poster. But it was not until the 1936 Summer Olympics in Berlin that this emblem became widely popular.

As an image of Olympism, Coubertin thought the rings had deep significance, that of the union of humanity.

American historian Robert Barney says, in his November 1992 article “The Great Symbol” published in Olympic Review (the official publication of the International Olympic Committee), that the roots of the inspiration for the rings came from Coubertin’s previous work.

In 1890, Coubertin became president of the Union des Sociétés Francaises des Sports Athlétiques (USFSA), a French sports-governing body. The USFSA arose as a result of a merger between two French sporting bodies, one led by Coubertin. To represent this merger, the USFSA had created a logo of two interlocking rings that was displayed on the uniforms of USFSA athletes starting in 1893 — one year before Coubertin initiated the Sorbonne Conference in Paris where the Modern Olympic Movement began.

The larger symbolism of circles was likely not lost on Coubertin either. Circles, or rings, represent wholeness, according to psychologist Karl Jung, and when joined together, continuity.