We just a ton of emails everyday from people with iPod related questions. Most questions can be easily answered by forwarding a link from our Free iPod Support section but every once in awhile we’ll get an email good enough to share… like this one.

The following email is from Anthony who owns several beautiful cottages near Newcastle, Britain in the UK.

“I do not possess an iPod but I have a question about them. I own a holiday cottage business and recently we have had a complaint from a customer. While staying in one of our cottages both her kids 2 year old iPods broke. The lights in the cottage had been flickering and there had been a couple of occasions when the electricity had been tripped. Could this affect iPods seriously enough to damage them?”

One of Anthony’s guest cottages

Here’s an extreme example of iPod damage by a burst of electrical power. In the summer of 2006, an American teenager named Jason Bunch was mowing his lawn while listening to his iPod when a storm front moved in and lightning struck his iPod. Unfortunately Jason’s ears were severely burned and he lost some of his hearing. His iPod was also obviously destroyed. 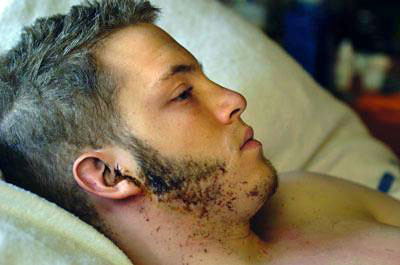 So unless both of the iPods in question were charging and physically connected to a power outlet in one of your cottages, you are not responsible for any damage. Going forward, make sure you place surge protectors in all of your cottages. The last thing you want is for one of your guests to ruin their $6,000 super laptop while staying at your cottage.

Here are some good surge protectors:

Why did both of the cottage guests’ iPods die at the same time? Perhaps the iPods were knocked around en route to the cottage or dropped during unpacking. Without a physical inspection it’s hard to tell. You can get broken iPods and iPhones repaired here.