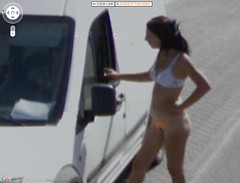 Google has been known to capture controversial images with their Google Earth satellites and Google Street View cameras before. Since it was launched in 2007, Google Street View has drawn complaints from individuals and institutions (including the Pentagon) that have been photographed. When you are photographing the entire planet, you are bound to capture a few embarrassing moments. Speaking of embarrassing, let’s examine these images here of a half-naked girl talking to a guy in a van. The images were captured by a Google Street View car just south of Madrid, Spain (GoogleSightseeing). 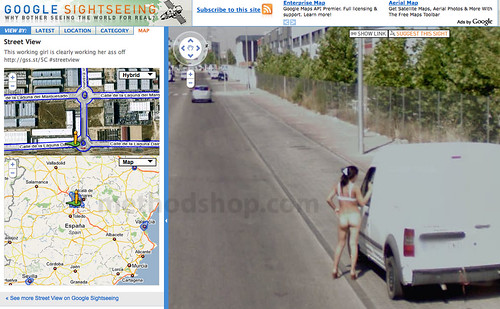 Let’s Not Jump To Conclusions

What exactly are we looking at here? Is she a “working girl”? Hold on! Let’s not jump to conclusions. Maybe it was a really hot day and this young lady was just looking for an ice cream truck. Maybe there’s a pool nearby. Or maybe it’s laundry day and the only thing clean was her orange thong. And maybe the guy in the dirty windowless van is just asking for directions… or maybe she’s just a hooker.

What Else Has Google Captured On Camera?

Want more? Whores in Madrid are just the beginning! Here are some more fun things Google has captured on camera: