On October 23, 2004, Ashlee Simpson entered pop culture infamy when she was exposed lip-syncing on Saturday Night Live (SNL). Here's a look back at the Ashlee Simpson SNL lip-sync incident and its aftermath.

The Incident: Ashlee Simpson on SNL

Initially, there was nothing out of ordinary about the broadcast. SNL musical acts usually play 2 songs and Simpson’s first song, “Pieces of Me,” looked and sounded fine. But when her band started playing her second song, “Autobiography,” the vocal track for “Pieces of Me” started playing again before Simpson’s mouth was near the microphone. The band didn’t know what to do and switched songs and started playing “Pieces of Me” again. In a moment of panic, Ashlee started dancing a hoedown and left the stage. The band kept playing without Simpson on stage for about 30 seconds and then SNL cut to a commercial.

Immediately the Internet exploded with talk about the incident. Every major blog, including ours, we’re talking about the broadcast. By morning, Simpson’s performance was the #1 news item on talk radio, the Internet and cable, and network TV.

So what happened? What the real cause of her infamous lip-sync snafu? Within minutes, the fingers of blame were pointing. Simpson immediately blamed her band. At the end of the show, she stood next to the SNL episode host, Jude Law, and said, “I feel so bad! My band started playing the wrong song, and I didn’t know what to do, so I thought I’d do a hoedown.” We later found out that the drummer had accidentally pushed the wrong lip-sync track button causing the vocals of “Pieces of Me” to play during the wrong song.

But everyone from the blogosphere to talk radio was less concerned about what technically went wrong, and instead focused on Ashlee Simpson’s exposure as a lip singer. They really wanted to know why she needed a lip sync track in the first place. This put Ashlee and her PR team in a downward spiral of lip-sync controversy that hadn’t been seen since Milli Vanilli.

Unfortunately, Ashlee already had a lot going against her. She was the younger sister of a popular celebrity at the time, Jessica Simpson, and many people were already critical of her musical talent. Was she actually talented or just riding her sister’s coattails? It’s like her entire career was a dangerous pile of tinder. And once the lip sync snafu happened on live TV, it sparked a media firestorm. In the days after her lip sync fails on SNL, the media was not kind to Ashlee Simpson. Howard Stern, in particular, was very brutal.

Why The Lip Sync Track?

Simpson’s PR strategy of ‘hiding from the media’ wasn’t working. In fact, it was making things worse. A few days later, on October 25, Simpson made her first major statement. She called into MTV’s Total Request Live and explained that complications from acid reflux caused her to lose her voice. As a result, her father/manager, Joe Simpson, pushed her to use a vocal guide track for the performance. 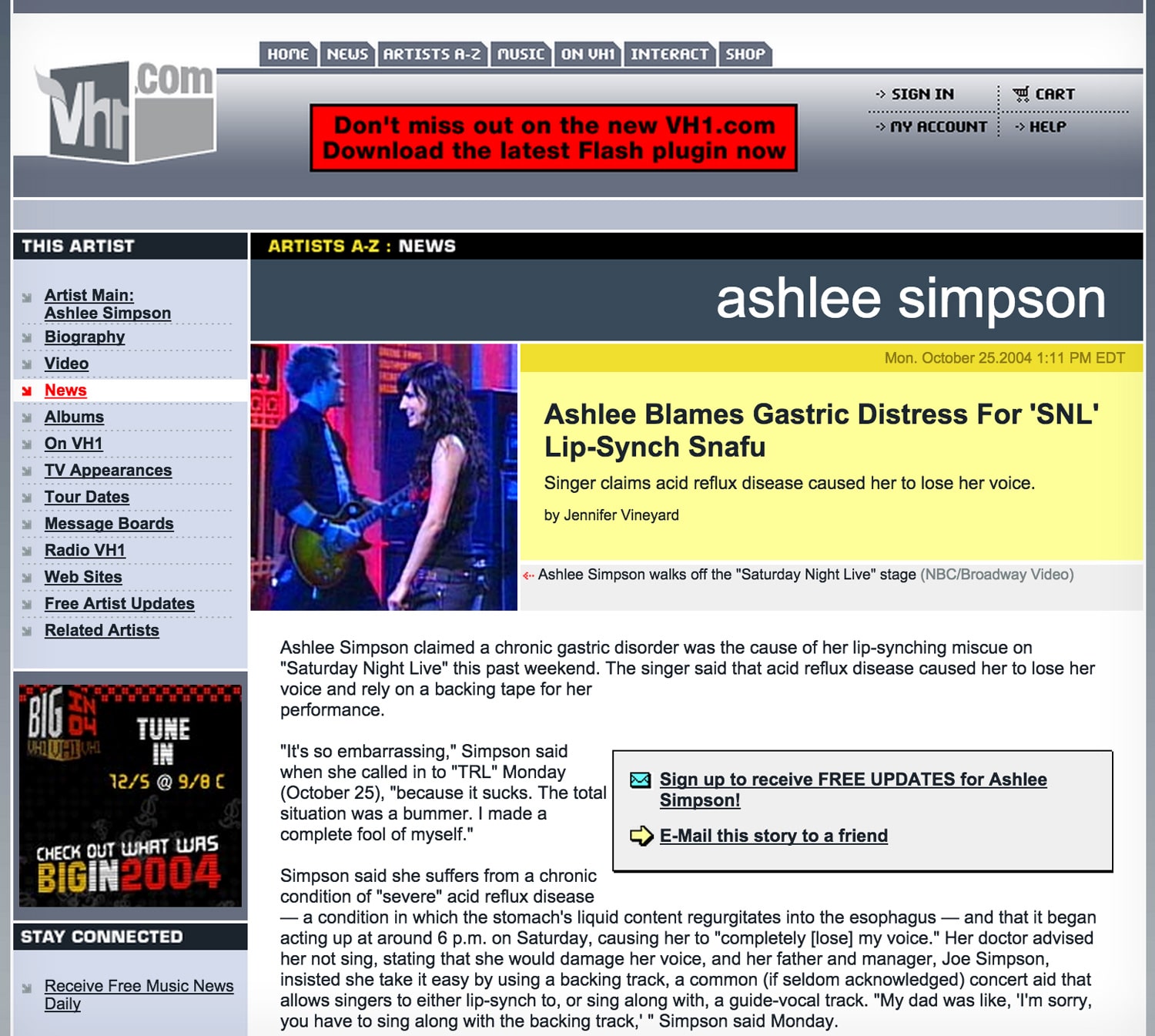 Trying To Redeem Herself

Simpson returned to Saturday Night Live‍ the following year on October 8, 2005, to promote her 2nd album “I Am Me.” Simpson performed without incident, but the damage to her career had already been done. The audience wasn’t watching to admire her musical talent. They were watching to see if she would make another mistake.

When it came time to talk about her 3rd album, Simpson’s record company was already acknowledging the challenges. Due to “prejudice” and “scrutiny,” Geffen Records producer Ron Fair told MTV News in 2006 that a new Ashlee Simpson album would be “very tricky.” He was right. Her 3rd album, titled “Bittersweet World,” was released in 2007 to mixed reviews and limited success. According to Nielsen SoundScan, the album only sold 126,000 copies.

Talk of her 4th studio album in 2011 never progressed and her domain, ashleesimpsonmusic.com, ceased being updated and eventually expired. Various owners of the domain now use for SEO purposes. It appears that Simpson has moved on from the music industry. 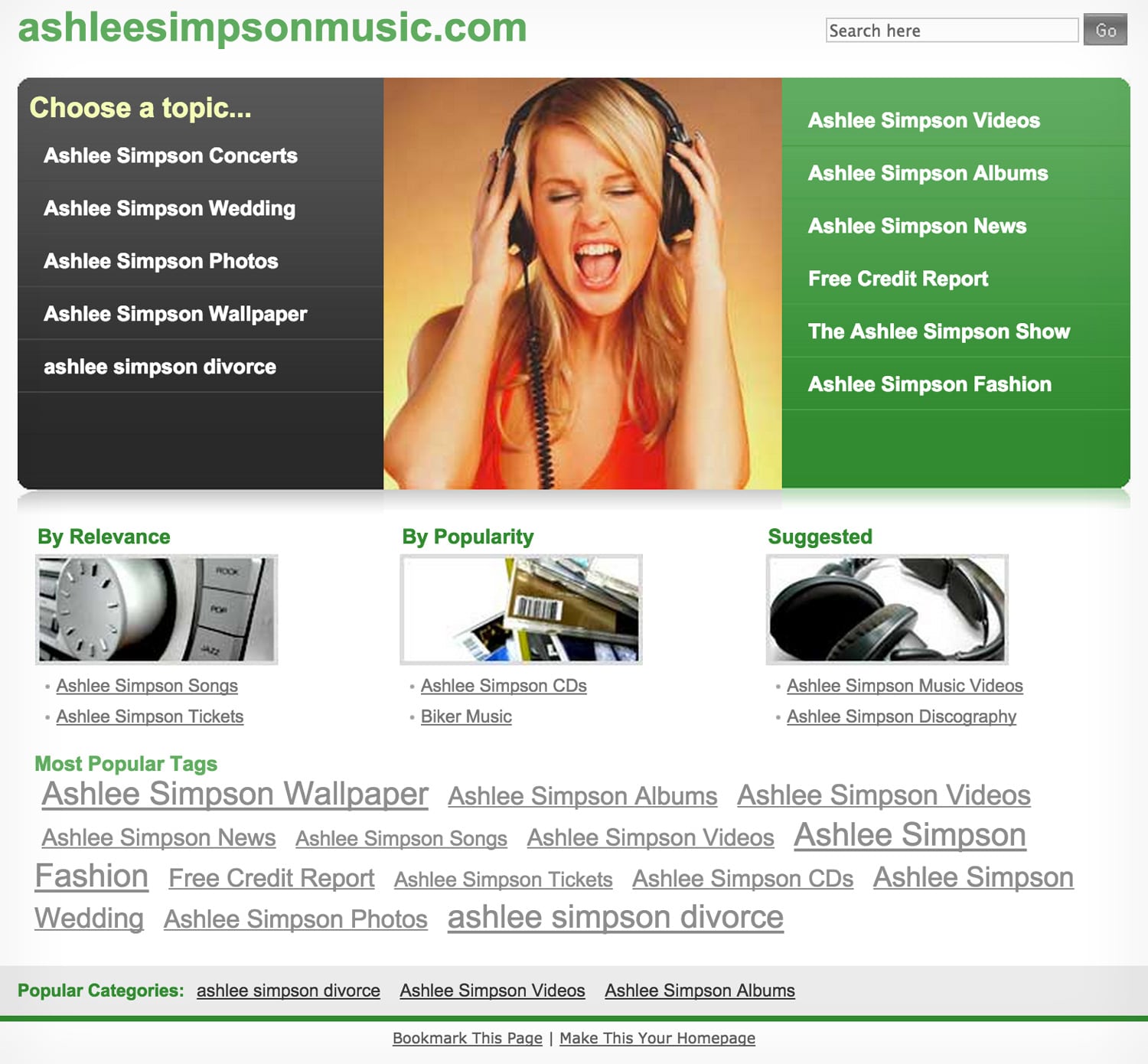 Looking back, think about the “what if” questions that have likely haunted everyone involved since the Ashlee Simpson SNL lip sync incident. What if the drummer had pressed the right button? What if Ashlee had just sung the same song, “Pieces of Me,” again instead of walking off stage? How would her musical career be different and where would she be now? Tell us in the comments below.

On October 23, 2004, Ashlee Simpson entered pop culture infamy when she was exposed lip-syncing on #SaturdayNightLive. Here’s a look back at the #AshleeSimpson #SNL lip-sync incident and its aftermath.

How Social Media Revolutionized Fandom Forever
Next Post: The Best Pumpkin Carvings On The Internet Were All Done By Noel Dickover