Gaming legend Sid Meier's simulation game, Civilization IV, allows you to rule throughout time and create your own legacy as you guide your civilization from the dawn of man through the space age and beyond.

Ever look at all the problems in our world and think to yourself, “I can do this better”? You can’t just snap your fingers and inherit Godly powers like Jim Carrey in the movie Bruce Almighty, but for $50 you can pretend on your computer. Gaming legend Sid Meier‘s simulation game, Civilization IV, allows you to rule throughout time and create your own legacy as you guide your civilization from the dawn of man through the space age and beyond.

This latest installment takes the critically acclaimed Civilization franchise to new heights with the addition of new ways to play and win. Just like the Tears for Fears song says, “Everybody wants to rule the world”, but how will you rule your world? Like Gandhi or Hitler? It’s up to you. Will you implement new technologies and conduct diplomacy or just wage war and become the most powerful leader the world has ever known (enter Dr. Evil). Civilization IV allows you to win the game in a variety of ways including diplomatically, war or culture.

Progress Through The Ages

The game starts you off with some caveman-like warriors and a small clan from with which you can settle a small village. As your city grows and prospers, you can gradually invent agriculture and pottery, build cities, roads, and factories, explore the planet, train armies, form governments, all culminating in the invention of space travel and the George Foreman Grill.

This latest installment takes the critically acclaimed Civilization to a beautifully detailed, living 3D world that expands the gameplay experience. Combined with new tools to manage and expand your civilization, all-new easy to use mod capabilities and various multiplayer modes and options, it just makes the game easier to play and more fun. 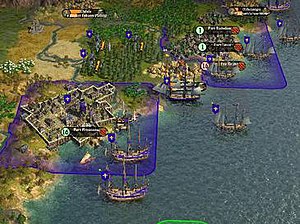 Some Key Features of Civilization IV:

Civilization IV is probably one of the best turn-based world simulator modeled after real-world cultures. Personally I’ve spent countless hours and admittedly, even an all-nighter, playing Civilization IV. So buyer beware. This game is very addictive!

The Civilization IV Warlords expansion pack has gone to gold master. It will ship to North America on July 24, 2007.