How is Coca-Cola going to follow up on the viral success of its "Happiness Machine video? How about by driving a giant red truck full of happiness around Rio de Janeiro? Their new Coca Cola Happiness Truck campaign looks like another instant viral video for the soda company.

How is the Coca-Cola Company going to follow up on the viral success of the Coca Cola Happiness Machine campaign? How about by driving a giant red truck full of happiness around Rio de Janeiro? Their new Coca Cola Happiness Truck campaign looks like another instant viral video for the beverage company.

Last year, Coca-Cola and digital marketing agency, Definition 6, shot a video at St. John’s University, in New York City, of a Coke vending machine spitting out everything from balloon animals to pizzas and a giant submarine sandwich (much to the delight of the students). They called it simply, “The Happiness Machine.” The video went on to be a viral success online, won tons awards including a gold CLIO and an Addy, was shown countless times by presenters at Social Media Week as a best practice case study and was even edited down to a 30-second commercial which aired during the season finale of American Idol.

But to follow up the original Coca Cola Happiness Machine, Coke is taking happiness to the streets, literally. This week, Coke released a YouTube video of a big red Coca-Cola truck delivering happiness throughout the streets of Rio de Janeiro in Brazil. But instead of pizzas and sandwiches, this “Happiness Truck” is dispensing more relevant regional items like surfboards, soccer balls, and beach rafts. It even has balloons and sprinklers. You can watch the Coca Cola Happiness Truck on YouTube here.

So far the Coca Cola Happiness Truck video has gotten great reactions from the press, Blogosphere, Twittersphere, Interwebs, and Facebookoverse. Hell, even Ryan Seacrest tweeted about the Happiness Truck today. 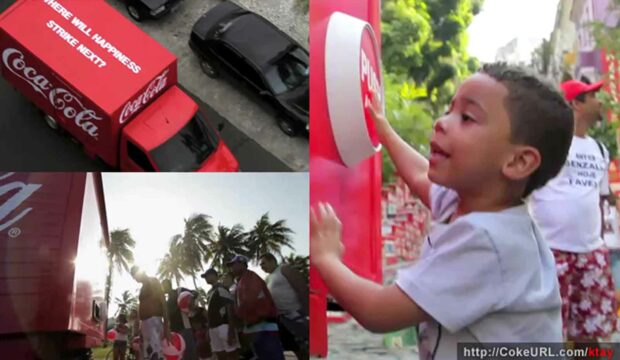 Where Will Happiness Strike Next?

We’re glad Coke is taking “Happiness” on the road and sharing it with an international audience… but if someone at Coke is reading this, please bring it back to the United States. You’ll need to top the Brazil video next and we have the perfect location for you. Where Will Happiness Strike Next? The Jersey Shore. Just think about it. The truck could give away hair gel, bottles of spray tan and gym memberships. And please pimp-out the Happiness Truck ruck with some fancy rims and hydraulics. Just image all the guido happiness! Maybe even get Snooki to do a cameo. Talk about viral, a Jersey Shore version of the Happiness Truck would be Super Bowl worthy! Coke, please don’t make us beg.

Anyway, if you love the Coca-Cola Happiness Truck campaign video as much as we do,  then you’ll probably want to download it from YouTube. Here’s a step-by-step MethodShop.com tutorial on how to rip video files off YouTube and convert them for any iTunes compatible device like an iPod, iPad, iPhone or Apple TV.