Here's an infographic and detailed data on coffee consumption by country. How does your nation compare to the rest of the world?

The world loves itself a good cup of coffee. This infographic displays the average amount of coffee beans (not liquid) consumed per resident in each nation. The average Earthling consumed 1.3 Kilograms of coffee beans, but Northern Europe definitely stands out for having the heaviest coffee consuming countries on the planet. Here’s an infographic and detailed data on coffee consumption by country.

Maybe it’s the cold, but nations like Finland (12 Kg), Denmark (8.7 Kg), Norway (9.9 Kg), and Iceland (9 Kg) all have averaged well over 5 Kgs. In contrast, a few nations stand out for their low or average coffee consumption including Italy (5.9 Kg), the United States (4.2 Kg) and especially Columbia (1.8 Kg). Apparently, Colombians don’t like their own coffee that much.

To see how much coffee the average resident in a country consumed, just roll over a location in the interactive infographic above. Why is coffee so important? It’s more than just a drink. Coffee is its own global economy. Coffea plant seeds are the second most legally traded commodity on the planet. Oil is obviously #1. Coffee is even recession proof. World consumption of coffee continued on an upward trend despite the recent economic downturn. An estimated 130 million bags (1 bag = 60 kilograms) of coffee was consumed in 2008/09 compared to 127.2 million bags in 2007/08. So basically, the next time you feel like giving the economy a little boost, just grab another cup of joe. 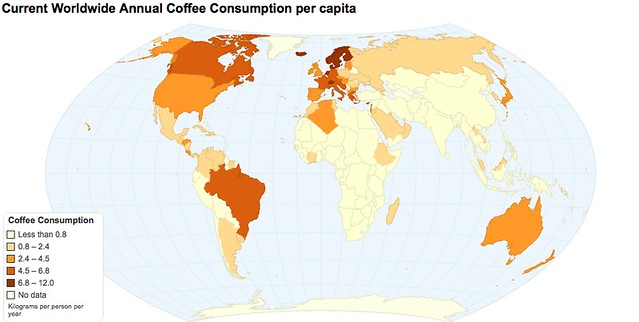 Did any data in the infographic surprise you? How does your nation’s coffee consumption compare to the rest of the world? Please leave a comment below.