Shocking Crane Accident Plunges Both Crane And Its Operator Into River

Shocking crane accident video shows the moment that a towing crane in India and its operator were pulled into a West Bengal canal after a harness snapped.

After a failed attempt to pull a truck out of a river in West Bengal, India, a rescue crane found itself needing a rescue. The shocking crane accident video shows the moment that a harness breaks, shifting the entire load to just one of the rescue cranes, sending it plunging into the muddy canal water below.

The Physics Behind What Caused This West Bengal Crane Accident

A coordinated crane lift with two or more cranes requires a carefully put together crane lift plan. Obviously, this crew in West Bengal, India, did not have a good crane lift plan… or perhaps, a plan at all.

A coordinated crane lift isn’t impossible, but it requires multiple calculations. The crane crew needs to account for the center of gravity of the object that is being lifted and how much weight each crane will be expected to handle during every moment of the lift. If one crane comes up faster than the other(s), then it will create a potentially dangerous load shift.

The strength of your rigging also needs to be closely calculated. The truck being lifted out of the canal was obviously heavier near the engine. Stronger rigging rated for the weight of the truck should have been used for the crane attempting that side of the lift. It wasn’t. As a result, the rigging on the left crane snapped, sending a shock-load to the crane on the right. Unfortunately, the nylon rigging being used on the crane on right did not snap. It held, and shifted 100% of the truck’s weight to the crane on the right, resulting in it being pulled into the water.

What Happened To The Crane Operator?

The first time that you watch this crane accident video, you might not notice the crane operator. That’s right! Someone was inside the crane when it fell into the canal. What happened to him?

If you look carefully at the beginning of the video, he’s located in the back corner of the cab. After the crane accident sends the second crane tumbling into the river, he pops out of the water a few moments later. Rattled, likely injured, but he’s alive and well enough to escape the cab and surface the water on his own.

The crane operator was very lucky that he wasn’t knocked out. If he was unconscious when the crane went into the river, he might now have made it out alive. Sadly, no one rushed to his rescue, including the person shooting the video. 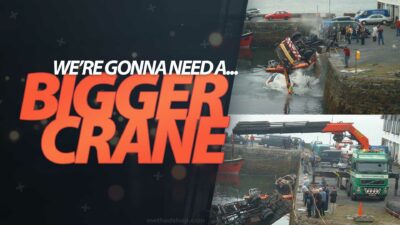 19 Fun Things To Do In Salt Lake City For Both Adults & Families
Next Post:What Does DNA Stand For (Do You Know The Answer)?