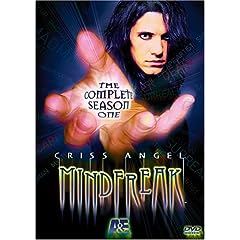 If you walked through Times Square this past Tuesday, then you probably noticed American magician Criss Angel suspended in midair. Angel was enclosed for 24 hours in a clear box that was encased in cement as fans and reporters watched. The box was then hoisted 40 feet above the ground in a parking lot just off Times Square.

Hundreds gathered to watch his escape, and a big screen showed Angel inside the box, kicking at the walls and dejectedly holding his head in his hands. When a countdown clock hit zero, the box was sent plunging to the ground.

As organizers called for paramedics and fans went quiet, Angel appeared atop the screen’s nearby scaffolding, waving to the crowd and with his hand across his heart.

While much of the crowd cheered, several people were heard asking: “Was he actually in the box?”

“Well, I was in it when I fell — that’s the truth,” Angel told Reuters, adding that people should be asking how he got from the fallen box to the scaffolding.

The stunt was meant to draw attention to the third season of his show “Mindfreak,” which started airing on A&E this week. Angel said the first episode would reveal how he escaped.