Does your Twitter feed need a little more spiritual enlightenment? His Holiness joined Twitter today. And it’s really him. The official Dalai Lama Twitter account is verified by Twitter. So far, his tweets are just from an RSS feed via TwitterFeed. But hopefully, that changes soon and we start getting some real tweets from his holiness.

It wouldn’t be the first time we’ve seen an account for the Tibetan spiritual leader on Twitter. There have been a few Dalai Lama impostors over the years. But this time the account is officially verified by Twitter.

You can find His Holiness the 14th Dalai Lama on Twitter here at @DalaiLama. We’re looking forward to his words of wisdom… 140 characters at a time. 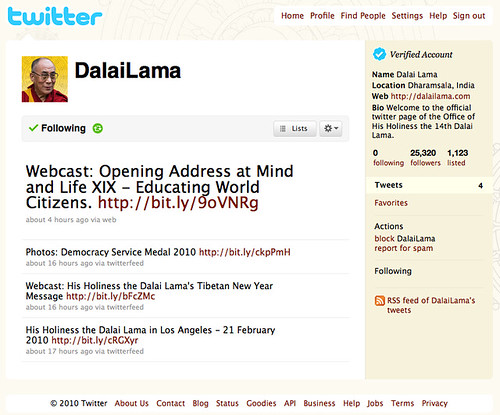 Terrible 1980s Pick Up Lines
Next Post: Chatroulette – Pedophile Paradise or The Next Big Thing

The popular COLD podcast now has an exclusive distribution deal with Amazon and has also been optioned to be a TV series.