You are here: Home / Culture / Holiday / 13 Funny Halloween Pumpkin Carvings (That Will Make You Laugh)

13 Funny Halloween Pumpkin Carvings (That Will Make You Laugh)

What does the average person do with a pumpkin? Maybe hollow it out and use the insides to make things like pumpkin beer and pumpkin pies? Or perhaps they’ll carve a funny Jack-O’-Lantern face and stick a candle inside as a Halloween decoration. But at one point, Halloween pumpkin carvings went extreme. Here are some very funny pumpkin carving ideas that will probably make you laugh. 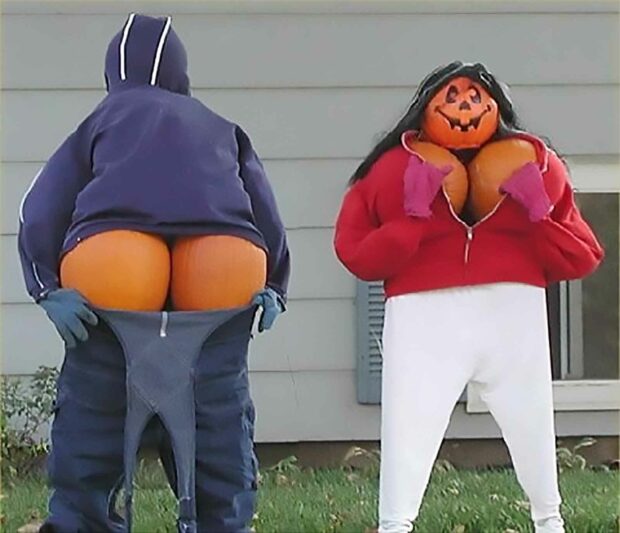 These funny Halloween outdoor decorations of a husband mooning and wife showing off her cleavage are sure to turn some heads in your neighborhood. And Depending on where you live, funny Halloween pumpkin carvings like these might just get a visit from the Police. After all, it won’t be the first time that neighbors have called the cops on each other over holiday decorations.

Here’s an incredibly detailed carving of an Anglerfish from a gourd. It’s so detailed and stunning that it make take a moment to realize that it’s really a gourd. 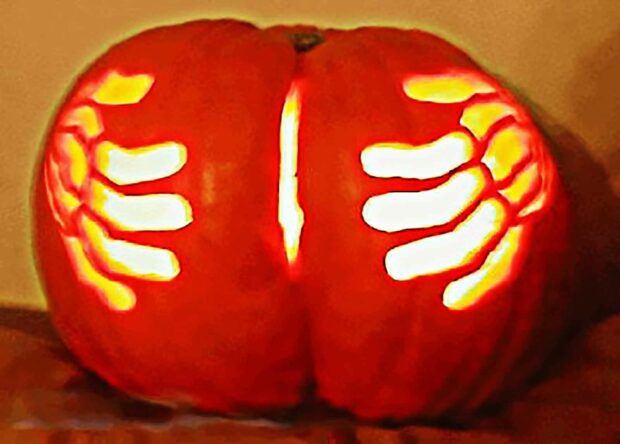 We’ve all heard the phrase “caught red-handed” before. But what about caught “orange handed”? Here’s a funny pumpkin carving idea of a pair of hands holding an orange pumpkin butt. 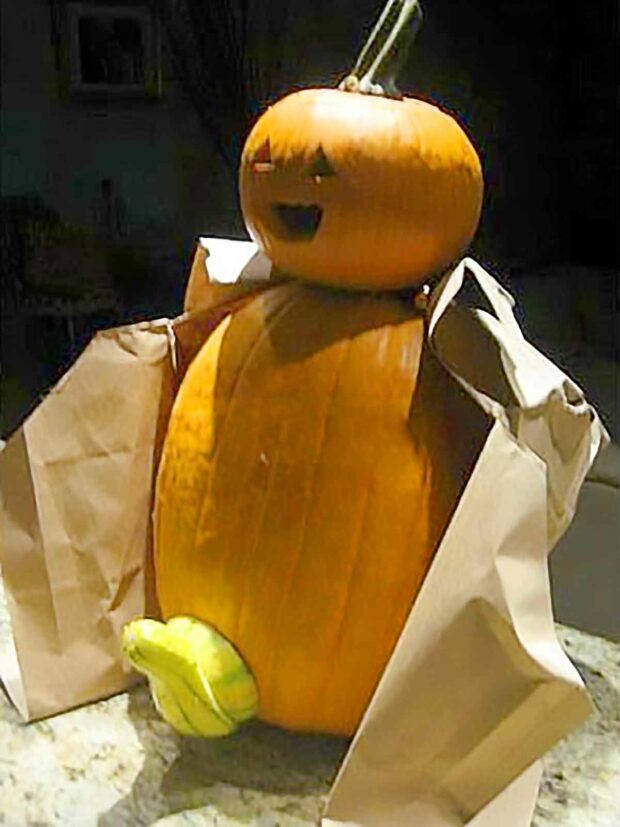 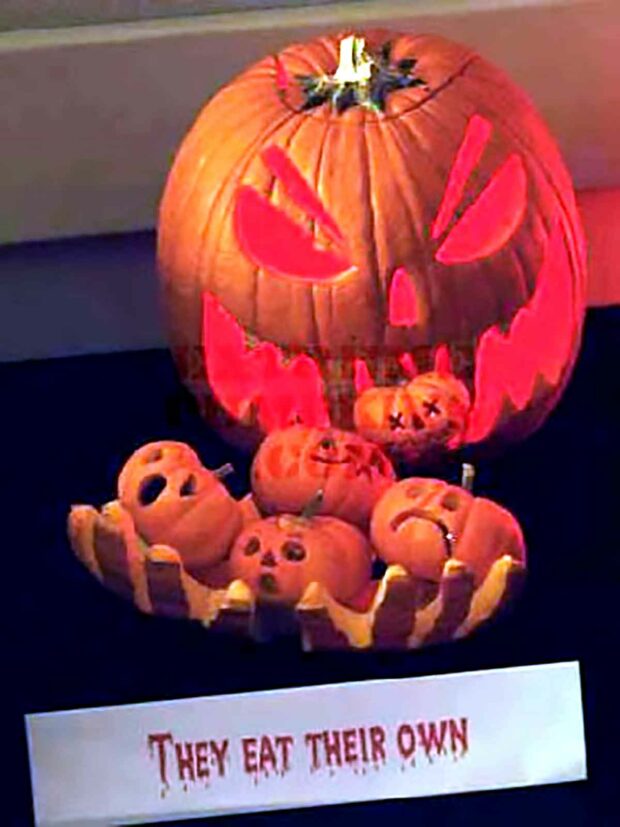 This creepy but funny pumpkin carving shows a cannibal pumpkin eating baby pumpkins. Slightly morbid, even if they are just pumpkins. 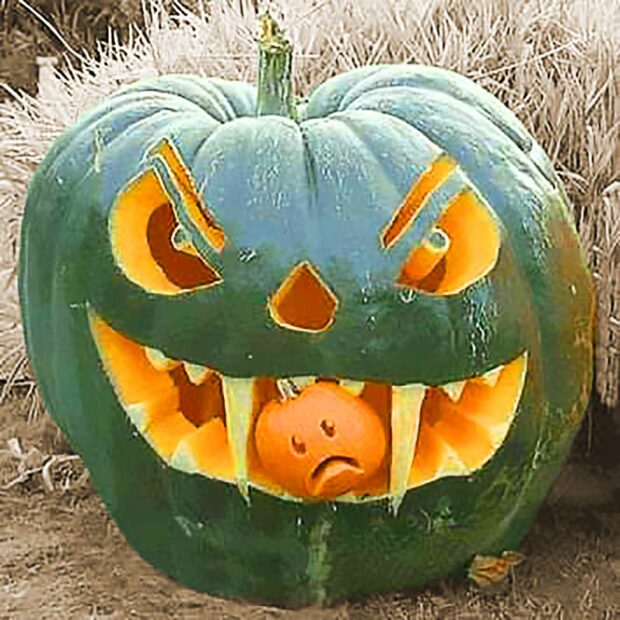 If you’re looking for clever pumpkin carving ideas that include opportunities to use smaller pumpkins or gourds, then you’ll love this vampire pumpkin carving. It has a big pumpkin sinking its teeth into some baby pumpkins. Slightly scary but probably not enough to cause nightmares in small children. 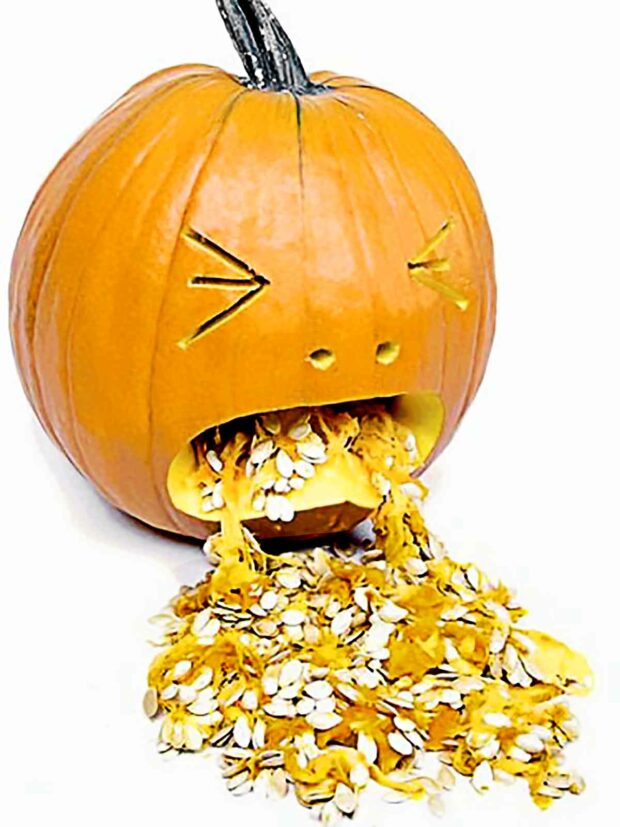 Wondering what to do with all of those pumpkin insides that you have to scoop out for your jack-o-lanterns? Most people just toss it or make a pie. Or you could always use the guts as part of your funny Halloween decoration. Just make your pumpkin carving look like it’s hungover and puking.

NERD NOTE: A jack-o’-lantern, sometimes also spelled Jack O’ Lantern, is a pumpkin whose top and stem have been cut out and interior removed, leaving a hollow shell that is then decoratively carved. Jack-o’-lanterns are associated with the holiday Halloween. The term is not particularly common outside North America.

Pumpkin Being Preserved In A Jar Of Formaldehyde 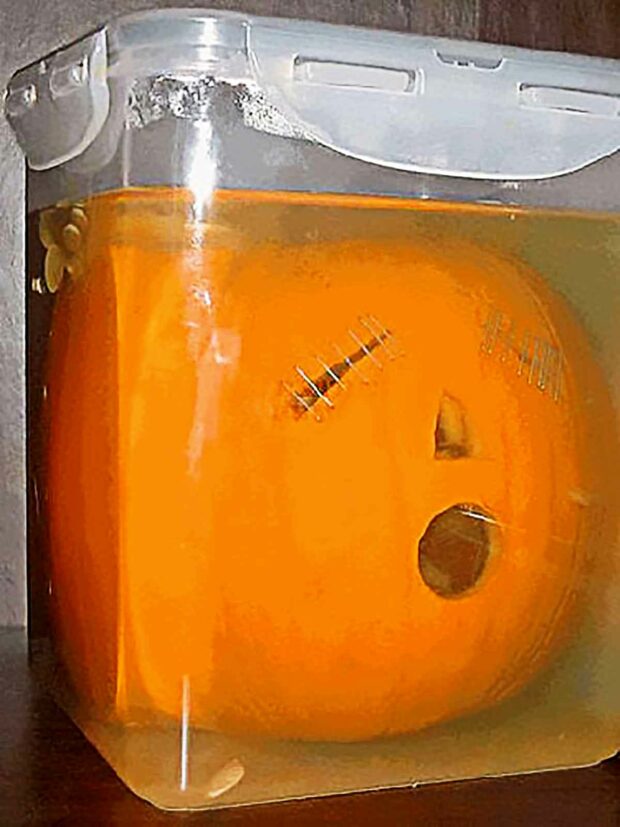 This poor pumpkin looks like it’s being preserved in a jar of formaldehyde by a creepy scientist. Because it’s inside a plastic container, this is one of those funny Halloween outdoor decorations that can survive wind, rain and other weather conditions before and after Halloween night. 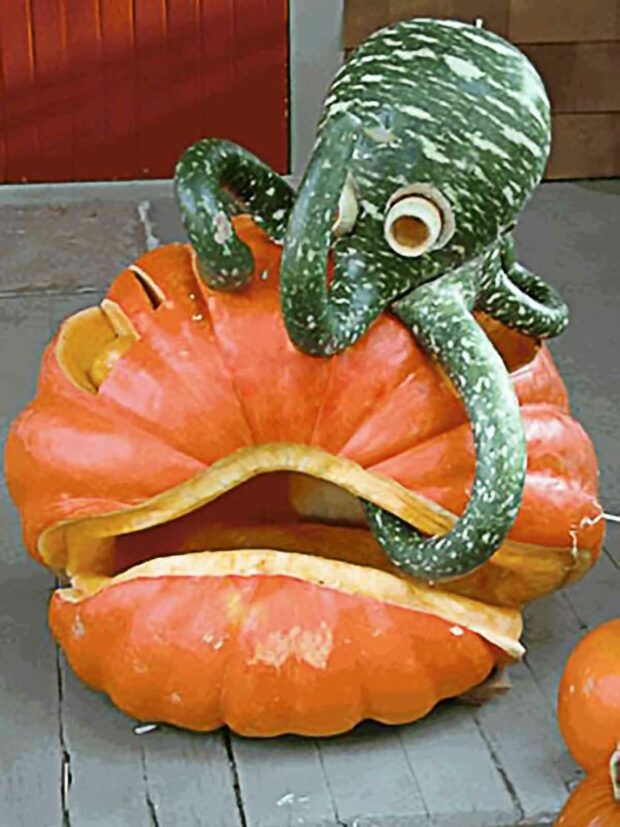 If you live near the ocean, then you’ll probably love this clever Halloween decoration depicting a gourd octopus attacking an innocent pumpkin. If you have access to some gourds that look like tentacles, then this should be a fun pumpkin carving project to attempt. 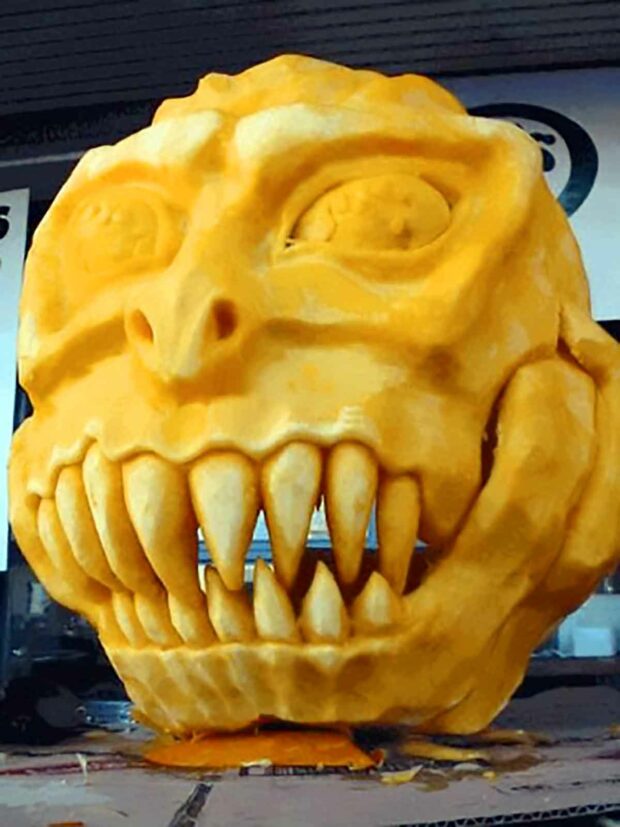 Yikes! Look at the detail of this pumpkin carving. This has to be one of the most elaborate pumpkin carving faces I’ve ever seen before. Even though it’s just a pumpkin, this demon-faced pumpkin is enough to give small children nightmares. 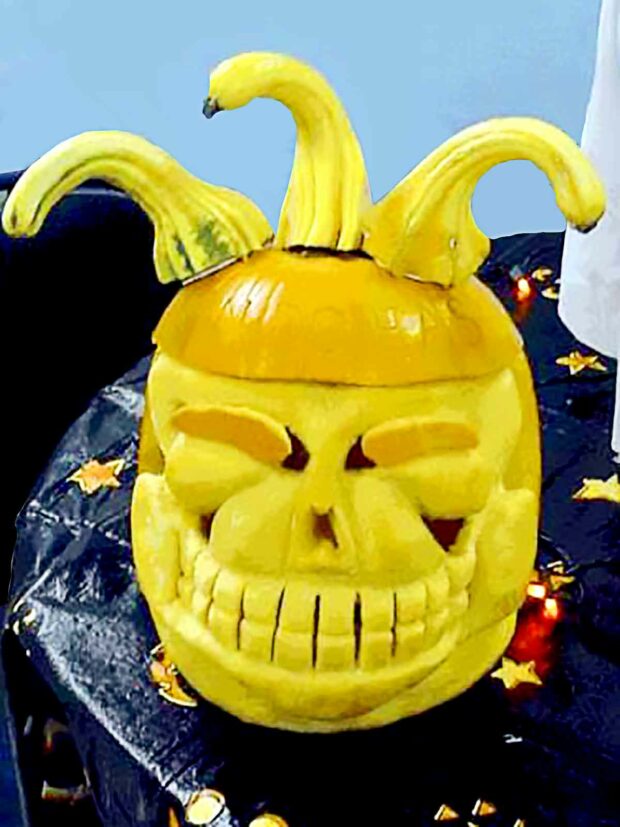 This creepy pumpkin has a skeleton face and a three-prong jester-looking hat. Very spooky, but not as bad as the Ghostface Scarecrow. 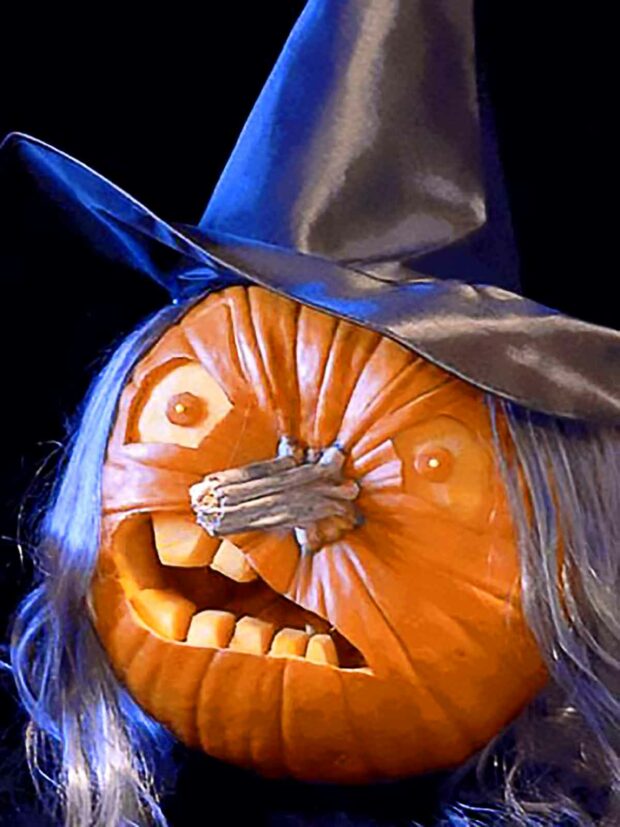 When researching clever pumpkin carving ideas, keep in mind that you don’t always have to put the pumpkin stem on top. This Halloween witch pumpkin carving is a perfect example of how to use the stem as a nose or other feature.

NERD NOTE: Many European cultures list Halloween is one of the liminal times of the year when spirits can make contact with the physical world, and when magic is most potent. Catalan mythology about witches and Irish tales of the Sídhe are both examples of this historic belief.