Google has officially launched Website Optimizer, a tool that Webmasters can use to test variations of a site’s content and design to increase conversions. The free tool is available at google.com/websiteoptimizer, and the search giant has also launched an accompanying blog, tutorial and discussion board.

Website Optimizer was first rolled out as a beta in late 2006 for users of Google’s AdWords platform, but the expansion means that any site owner can access the tool (provided they have a Google account, like Gmail) and start running multivariate tests. 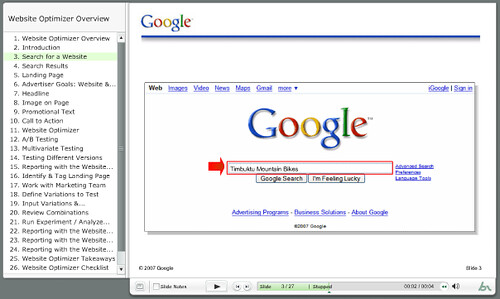 5 Wild Turkey Attack Videos That Might Make You Run For Your Life
How To Uninstall Spyware and Adware from Mac OS X
Facebook0Tweet0Pin0LinkedIn0
Tag: internet
Previous Post: ←

Friendly Pole Dancing Lesson Between Strippers Ends In A Cat Fight
Next Post: Cluttered Desktop Art: Turn The Icons On Your Messy Desktop Into Beautiful Art