The first official movie trailer formatted for iPod has been released by Apple. A trailer for Peter Jackson's "King Kong" is now availible for download from Apple.com in iPod video format. The free download is 12.2 MB. "King Kong" hits theaters on December 14th.

When you’re Peter Jackson, a three-time Academy Award winner coming off one of the most successful film trilogies in history (Lord of the Rings), what can you possibly choose as your next project that won’t seem like a letdown? King Kong, of course — the timeless tale of a gargantuan ape-monster captured in the wilds and brought to civilization, where he meets his tragic fate.

You can’t see Kong on the big screen until the film is released in theaters later this year. But you can see him on the small screen now!

Apple.com posted a new trailer to promote King Kong in iPod Video format. The trailer has been compressed into a 12.5MB zip file and is available for download here. 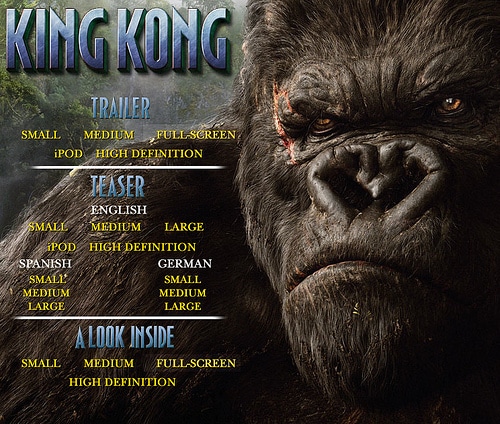 TiVo Series2 Lets You Transfer Videos To iPod And Sony PSP (2005)
Next Post: Fixed: What To Do When Your iPod Won’t Sync