Steve Jobs announced an update to the Apple TV at Macworld San Francisco this week as well as iTunes Movie Rentals, which were already rumored to be part of his Macworld keynote speech.

Jobs admitted that Apple’s online video plan had been a disappointment and that users didn’t take to watching online video the way Apple had expected. When Jobs first announced the Apple TV last January, Apple’s initial video plan was too complicated for many people. Getting a movie or TV show onto your Apple TV required customers to buy the video from the iTunes Store, download it to their computer, then sync/stream the file using an Apple TV.

Although Apple has already sold 7 million movies, Jobs said: “That’s more than everyone else put together, but it did not meet our expectations.”

Apple plans on overhauling their strategy by making 2 major changes:

Jobs thinks that viewers would prefer to rent movies, not buy them. As a result, the new Apple TV software will allow users to rent first run films from every major movie studio including Fox, WB, Paramount, Universal and Sony in HD. Jobs called it “A better way to provide movies to our customers.” Blockbuster and Netflix can’t be happy right now. 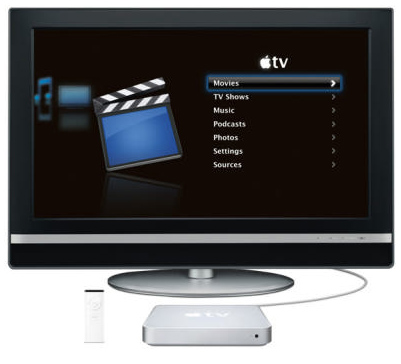 1000 films ready for rental will be available on iTunes starting in February. Going forward, movies will be available to rent 30 days after they are released on DVD. Broadband users won’t have to wait for these giant movie files to download. Moments after you rent the film using your Apple TV, it will be watchable immediately via streaming. How much are movie rentals? $2.99 to rent older titles, $3.99 for new releases. Add one more $1 to those prices if you want to rent the movie in HD.

Thomas Lesinski, president of Paramount Pictures Digital Entertainment, joined Jobs on stage at Macworld and called the rental service a “defining moment” for the distribution of digital video content. “This is really going to take things to the next level,” he said. 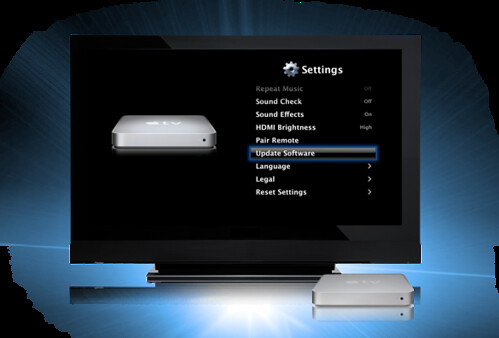 The new Apple TV software features will be included in a free Apple TV update scheduled to be released in February. You can update your Apple TV by selecting “Update Software” from the Settings menu.