10 Fun Marvel Casino Games That You Can Play Online

You won't find a Marvel themed slot machine inside a US casino anymore, however the online games are still available through a subsidiary called Marvel Jackpot. Here are some of the most popular online Marvel themed casino games and our review of them.

I usually attend 2-3 conferences a year in Las Vegas for work. And the sci-fi/fantasy geek in me means that I usually spend some serious time playing various themed casino games including Lord of the Rings, Alien, Battlestar Galactica and of course Marvel and/or DC Comics. But in October 2013, Disney, the owners of Marvel, announced that they would begin phasing out all Star Wars and Marvel themed slot machines in the United States. Why? Gambling conflicts with Disney’s family-friendly policies. It makes sense, but it’s definitely disappointing.

However, Marvel comic books fans who enjoy playing casino games with their favorite superheroes shouldn’t give up just yet. Although you won’t find a Marvel themed slot machine inside a US casino anymore, the online games are still available through a subsidiary called Marvel Jackpot. Here are some of the most popular Marvel casino games that you can still play online (for now) and my review of them.

Marvel Roulette is similar to American Roulette where there’s an extra double zero space. Except in this game, the extra space is called Marvel Bonus. If your roulette ball lands on the Marvel Bonus space, you are taken to a special slot machine round. I played for a couple of hours and won $700+, but sadly never got to witness the Marvel Bonus round. Great game. Great graphics. I’ll definitely be back to play this one. 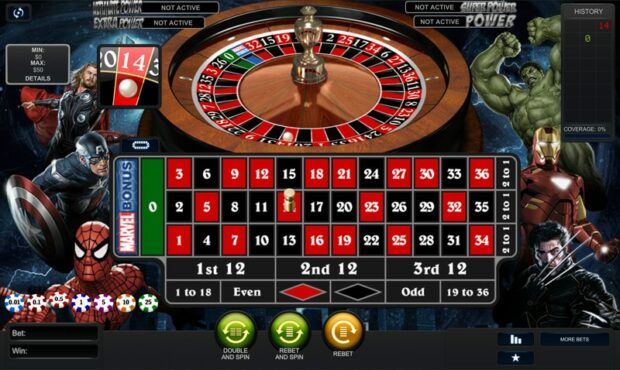 Blood, bullets and sexy vampire girls. That’s basically the concept behind the Blade slot machine game. There’s an “Auto Start” button that will spin for you automatically. Just pick how many Lines you want to bet. There are a total of 20 confusing lines to bet on. I played each line for $0.10 each ($10 is the max) and usually won something every few spins. I love both the Blade movies and Marvel comic books, but Blade wasn’t lucky for me. In about 5 minutes I lost $600 with a high bet running on AutoPlay. The graphics aren’t that great either. Casino.com obviously isn’t in love with Blade either. They don’t even have a link to it from the main slots page. I had to hunt for it to find it. 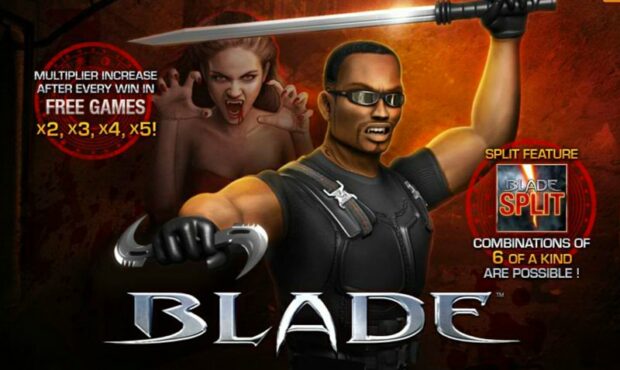 Besides being a disappointing 2003 movie starring Ben Affleck, Daredevil is also a slot machine game. While we wait for Disney to give this character a decent film franchise, I took the Daredevil slots game for a 5-minute run. After winning a few $500+ spins, I took my money to the next Marvel game. Decent graphics based on the comic book. No Affleck. 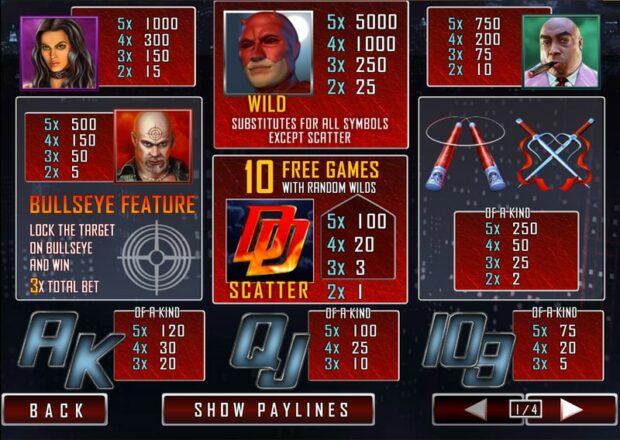 Instead of using generic artwork inspired by the comic books, like the Blade and Daredevil slots, Iron Man 2 features imagery from the popular film including Robert Downey Jr., Mickey Rourke, and Scarlett Johansson. Noticeably absent are Gwyneth Paltrow and Don Cheadle. Not sure why. Great game. Made $250 on my 2nd spin. 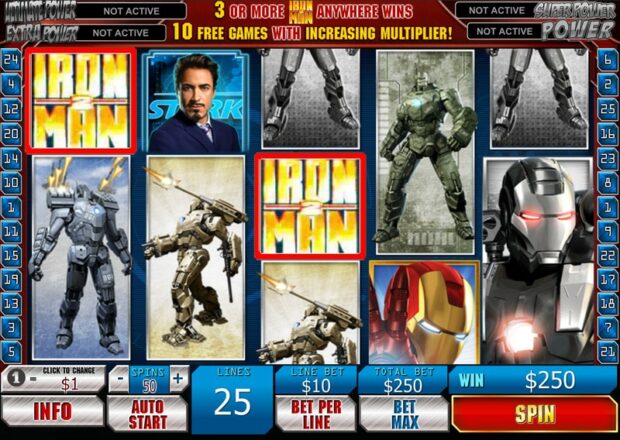 Love comic books? Hate the movie versions of books? I know in real life, actor Nicolas Cage is a huge Ghost Rider fan. He even has Ghost Rider tattoos. But his over-the-top acting style just didn’t do the Ghost Rider films justice. But the Ghost Rider casino game begins with the animated Marvel Studios logo and then segues into a 3D animated game trailer. Big production value compared to the other Marvel gambling games. Max bet is $1,000. Lowest is $0.20. Despite the production value, Ghost Rider was unlucky for me. I did “Auto Play” with $100 spins and went from $1,000 to $50 in 5 minutes. An $850 spin kept me alive longer than some of my other attempts. I blame Nicolas Cage’s bad acting skills for giving me bad luck. 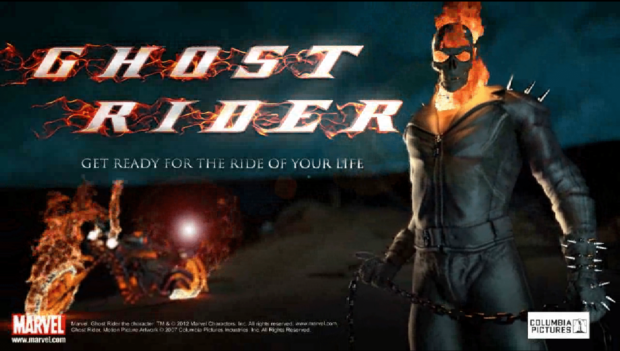 The Captain America: The First Avenger slots game features a mix of both the movie and comic book imagery. But honestly, I wasn’t a fan of the graphics. The silver text on a tan background just looked washed out. After 15 minutes of $20 spins, I was down and annoyed with the graphics. Time to move on. 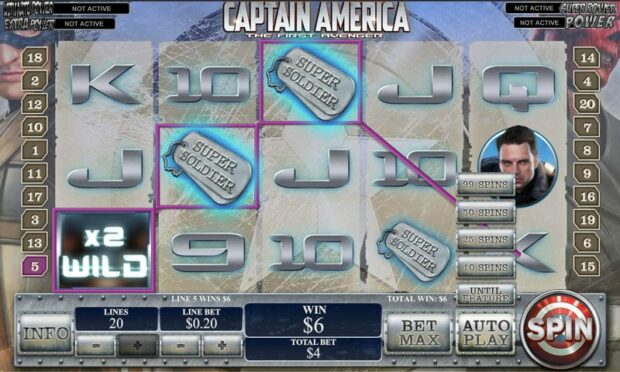 OK, enough with the slots! Let’s mix things up. The X-Men: Scratch game is a cross between a scratch-off lottery ticket and a “match” card game. If a pair of cards are both Heroes or Villains from X-Men, then you win half. A perfect match wins big. Different characters are worth more/less. The max bet is $100 a pair and $600 per round and the max payout is $37,000. Although I felt like I was playing a kids card game at one point, I enjoyed X-Men: Scratch. The only issue was the cartoon image of Charles Xavier, looked more like Moby than Patrick Stewart. 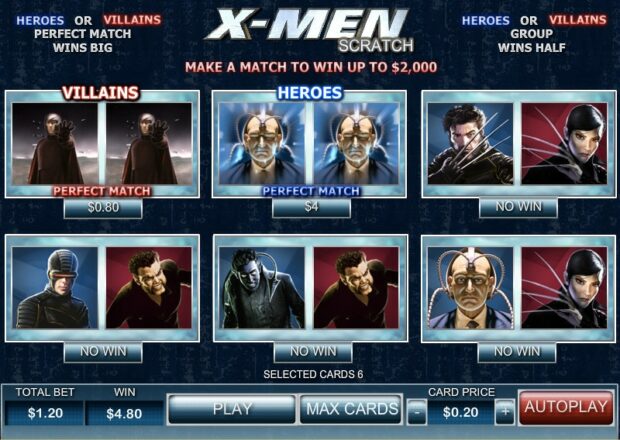 08) Spider-Man: Attack of the Green Goblin

The graphics closely resemble the 1980s Spider-Man cartoon – a childhood favorite of mine. The bonus screen is clever. There are 5 different possibilities based on a stack of comic books: The Ultimate Fight, City Chase, Radioactive freebies, Rivaling freebies, and Hot Zone freebies. I really liked Spider-Man: Attack of the Green Goblin.

The Avengers slots game is one of the newest Marvel Jackpot games and it shows. The animated opening trailer is video game quality. Game imagery is based on the movie. I set a low bet and put the game on AutoPlay until I scored a feature. The feature screen is a match game that earns you multipliers that help you during gameplay. 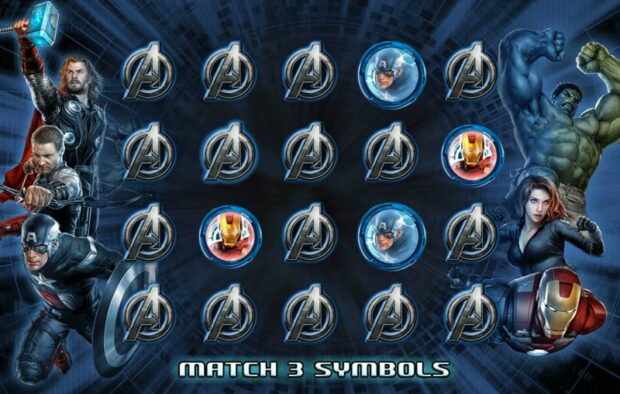 Will my attempt to win big playing the Hulk has me smashing through payout records or hiding in a dark corner in the fetal position like Dr. Bruce Banner? With 5 reels and 50 pay lines, this is one of the Marvel Jackpot games with the most opportunities to win jackpots.

Apparently, the Hulk is my good luck charm. I earned a Smash Bonus after a few spins and had an opportunity to smash some Police cars and helicopters. Each car has a hidden cash value only revealed after you smash it and you get to smash 3 out of 5. I won $500, $200 and $100 after smashing my 3 cars. On the next screen, you get to smash 1 out of 3 helicopters. Each helicopter has a multiplier. I got an x3 multiplier making my total win $2,400. Thanks, Hulk! 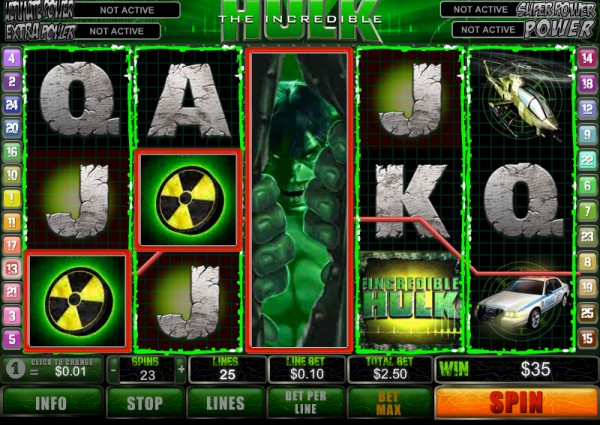 What did you think of my favorite Marvel casino games? Obviously, some are better than others, but all of them are lots of fun to play. If you look closely at the copyright dates on the different splash screens, you’ll see that the games get better and better each year. Hopefully, a Guardians of the Galaxy game is next. But currently, Iron Man, Hulk and Marvel Roulette are my favorites. What about you? Let me know in the comments.

VIDEO: How to Levitate A Screwdriver With Compressed Air
Next Post: 7 Wonders: Treasures of Seven – Play Now For Free