Want to make it big as a music video director or editor? Here's your chance thanks to a new Modest Mouse music video contest from Apple.

Want to make it big as a music video director or editor? Here’s your chance thanks to a new Modest Mouse music video contest from Apple. The band Modest Mouse wants help making a music video for their new song “Missed the Boat.” With the help of Apple, Modest Mouse posted 12 high quality videos (each shot at a different angle) of them performing in front of a green screen.

The public is encouraged to download these video clips and edit them together into one final music video. Feel free to use your own footage and experiment the green screen. 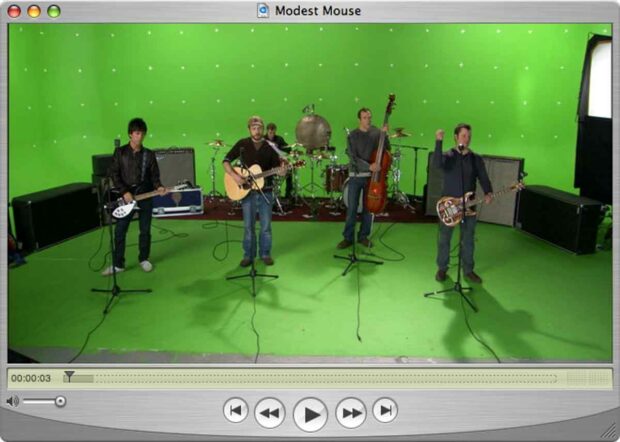 Why is Apple generously providing massive amounts of bandwidth for people to download these giant high resolution video clips? This Modest Mouse music video contest is really just a promotion for Apple’s video editing software Final Cut Studio. Although the rules don’t say that you have to use Apple software, they obviously would rather you use their editing and sound mixing software Final Cut Studio and Logic.

Here’s what we’re looking for. Modest Mouse want a video for their new single “Missed The Boat”. They know there are tons of talented fans and video directors out there who have what it takes to put it together. So that’s where you come in.

The band has shot performance footage of the entire song on green screen from multiple camera angles. Footage is posted here for you to download. You, the director, can download performance footage, add your own digital assets, and make a video using Apple editing tools.

Use all of your own footage or use some of the band’s. It’s all up to you; just use your imagination.

You will be required to sign a release and give up all rights to the video. When your video is ready, you will submit by following the “Submit an Entry” link to register, login and post.

We recommend not waiting until the last minute to submit your video. Traffic is often very heavy at the end of media festivals and it may be difficult for you to upload your video. Upload your submission early, so that your fans have longer to vote for you.

UPDATE: Thanks to Mike Ansaldo at WIRED for crediting us with helping to break this story. We’re big fans of WIRED and it was a thrill to see us mentioned on their website.