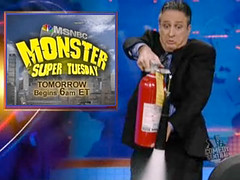 This past Tuesday was “Super Tuesday” in the United States. Both the Republican and Democratic political parties held primary elections in 22 states to help decide which candidate would represent their parties in the upcoming November U.S. Presidential election.

On Tuesday’s episode of The Daily Show with Jon Stewart, Jon jokingly wondered “What’s bigger than Super Tuesday?” These are what the American cable news networks came up with and Jon Stewart’s reactions.