NBC Universal, which has already touted its 2008 Olympic Games coverage as the most-watched television event ever, picked up substantial numbers in the digital arena with its presentation from Beijing.

NBCU said its mobile Web site racked up 6.5 million visitors over the course of the event in August, garnering 36 million page views and 826,000 video views.

NBCU’s Olympic Games VOD offering garnered 6.7 million total views, including 4.7 million views for in-Game highlights and encores. With over six times more viewing than NBCU’s Torino Olympics VOD content, usage reached 1.8 million unique users from April 29 through Sept. 1, including 1.4 million unique users during the Beijing Games. By the end of the Games, consumers watched some 750,000 hours of Olympic Games via VOD, including 500,000 hours of in-Games highlights and encores, according to Rentrak and Direct Carrier Data.

On the broadband beat, NBCOlympics.com was visited by 7.5 million people who used over 30 million streams of live and VOD coverage, translating into 7.5 million hours. A breakdown of the data shows that 3 million consumed 15 million live Olympic streams equaling 4 million hours online, while another 4 million checked out on-demand Olympic events to the tune of 3.5 million hours.

By comparison, for all of NBCU’s TV properties, 214 million people watched some Olympics coverage. NBC averaged a 16.2/28 share and 27.7 million viewers for its 17 primetime telecasts.

Jean-Briac Perrette, president of NBCU digital distribution, said in a statement that the “NBC Olympics Mobile Web and off-deck video offerings provided value to our mobile partners and the experience of a lifetime to fans of the Games.”

Added Bridget Baker, president, TV Networks Distribution at NBCU: “The historic content offering of the 2008 Beijing Olympic Games provided our distribution partners and their customers with an unprecedented multiplatform package of unique and compelling content. No less than 12 million hours of Olympics content was consumed via digital offerings – on demand, HD, broadband and interactive applications – and it proved to be just what viewers wanted.” 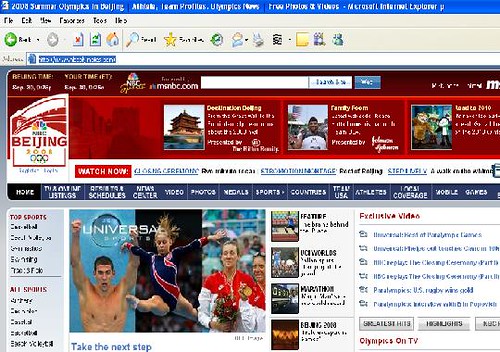