Mapping The Average Price Of Beer In Every Country (2021)

How much is a beer in your country? How does it compare to the rest of the world? Here's a map of the average price of beer in every country.

Depending on where you live in the world, the price of beer for a 12 oz bottle of (330 ML) varies wildly. According to the World Beer Index from Expensivity, the average price of a bottle of beer ranges between $1.68 in South Africa to $11.26 in Qatar. Beer prices from 58 total countries were detailed on the map.

How The Average Beer Price Per Country Was Calculated

Calculating the average beer price for an entire country was no easy feat. First, the average price of beer for a 12 oz bottle was compiled from online stores. Then it was averaged against Numbeo, the world’s largest cost-of-living database, and hotel and bar menus. Final numbers were all then converted into USD.

Where To Find The Cheapest Beer In The World

If cheap beer prices play an important role in your global vacation plans, then you can get a beer anywhere in South America for $3 or less. But the cheapest places to buy a bottle of beer in the world are Bosnia ($1.96), Argentina ($1.79), Ukraine ($1.76), and South Africa ($1.68). At only $1.68, South Africa has the honor of having the cheapest price of beer per bottle in the world. Congratulations!

Were surprised not to see China among the countries with the cheapest price of beer? Although a bottle of beer in a Chinese supermarket is under $2, Chinese hotels charge $13+ pushing their national average up to $7.

What’s Up With Qatar’s Expensive Average Price Of Beer?

The global loser when it comes to expensive beer prices is definitely Qatar. There are a few countries with pricey pints, including Jordan ($9), China ($7), and Japan, Switzerland, and France ($6), but Qatar has them all handily beat at whopping $11.26 per bottle! No other country in the world even charges double digits for an average bottle of beer besides Qatar. Boo!

The extreme price hike on beer in Qatar was likely in anticipation of the 2022 World Cup. As the host city, Qatar will have thousands of thirsty tourists looking for a beer and forced to pay $11.26 per bottle. Not only will the expensive price of beer help the country turn a pretty profit, but it will probably help reduce the number of Police incidents that normally follow drunken soccer fans. 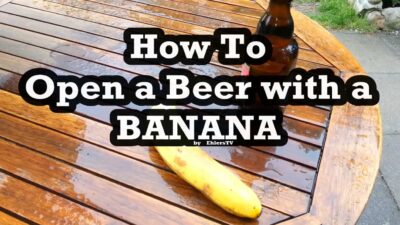 How To Open A Beer Bottle With A Banana

Read moreHow To Open A Beer Bottle With A Banana

Soccer fans looking to avoid the expensive price of beer in hotels and restaurants will hit a dead end at the liquor store. A special permit the Qatar Distribution Company is required to buy alcohol in Qatar. Permits are for residents only and the amount of alcohol that you are allowed to purchase is based on your annual salary.

NERD NOTE: It is illegal to import alcohol into Qatar. All luggage is scanned at the airport for alcohol. Smuggling alcohol is a serious offense and may result in fines, jail time, or both.

What’s The Average Beer Price In Your Country?

How much is a beer in your country? Can you buy a beer cheaper in your city? Were you surprised to see some of these beer prices from around the world? Let us know in the comments.

NERD NOTE: Qatar has a zero-tolerance policy when it comes to drunk driving. Sentences for drunk drivers range from one month to three years and usually include stiff financial fines and sometimes even deportation.

The 15 Best Big Lebowski Quotes That Really Tie The Room Together
Next Post:15 Cute And Corny Pick Up Lines For St. Patrick’s Day