Let's take a look at the most profitable Android apps in the Google Play Store and find out what has made them so successful.

While games make up a good majority of the apps in both the Apple and Google Play Store (there were about 400,000 available by the end of 2015), a very small percentage of them are successful enough to be profitable. So, what makes a game profitable as an app anyway? Let’s take a look at the most profitable Android apps in the Google Play Store in 2016 (so far) and find out what has made them so successful.

As you might expect, there are a lot of household names on the Google Play Store’s Top Grossing Android Apps list. But one thing that might surprise you about these apps is they are all… free! How can free apps dominate the top 10 grossing list? They all have in-app purchases. The strategy is to get gamers hooked on the game and then use that connection to get them to pay for in-game enhancements or resources. 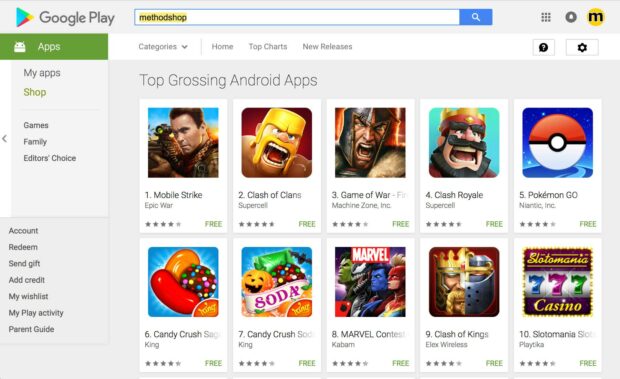 Pokemon Go‘s entry on the list probably comes as no surprise. This summer, gamers around the world found themselves infatuated and (temporarily) addicted to searching for Pokemons in their neighborhoods. The game is also notable for helping gamers go beyond their screens. Pokemon Go players actually built a deep sense of community with each other IRL.

The strategy game Mobile Strike is action-packed and very addicting. Players can connect and play together or against other people from around the world. Mobile Strike is engaging and easy to use and players are encouraged to keep their status rising by using the equipment and other elements.

There’s a lot of “clashing” in the top 10: Clash of Clans, Clash of Kings and Clash Royale. My favorite is Clash Royale. This action-packed card game allows players to collect Clash Troops and other important elements found in the game shop and use them to wreck the towers of their opponents.

All of the most profitable Android apps in the Google Play Store share similar characteristics:

When you combine these elements with a successful team behind the scenes, you have a recipe for success. A successful gaming app doesn’t only have a high number of installs, but a high percentage of users who remain with the app over a long period of time and a percentage of those players who are willing to pay money for upgrades, bonuses, tools or to rise in status.

Successful mobile game monetization requires a game that includes as many of these characteristics as possible combined with a solid marketing strategy. With so much competition in the market, it isn’t easy to make a profitable gaming app, but it isn’t impossible either.