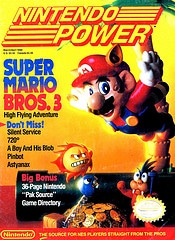 I saw this comic strip posted on Reddit this week (see below) and couldn’t resist sharing it on MethodShop. It’s about a grandmother who has to take drastic measures when she finds out her grandson’s favorite magazine, Nintendo Power, was canceled. And unfortunately, it’s true. It was announced last week that December 2012 will be the final issue of Nintendo Power magazine.

It’s a tearful conclusion for many seasoned gamers who grew up reading Nintendo Power and playing games like Duck Hunt, Contra,

and Super Mario Bros. But in the age of blogs, Facebook and Twitter, game magazines are no longer really needed. Any game codes, hints, cheats or news can readily be found online. RIP Nintendo Power and thanks for hooking me up with the “Konami code” in 1988 so my brother and I could finally beat Contra.

Anyway, back to the comic strip. For some reason, my grandma never did anything like this for me when Stuff Magazine got canceled…. actually, if she did, it would have been really creepy.

Jimmy Fallon asked Twitter to “Ruin A Movie With One Word” and his audience did not disappoint. From Forrest Trump to Harry Potter And The Chamber Of Farts, they came up with some hilarious movie titles. Here are the best ones.