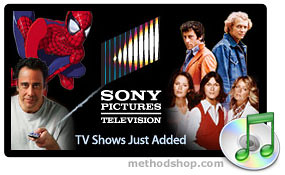 Last week Sony Pictures Television made its programming available for the first time in Apple’s iTunes Store (US).

Episodes from current shows “‘Til Death” and “Rules of Engagement” as well as from classic series including “Starsky & Hutch,” “Charlie’s Angels,” and “NewsRadio” were added to iTunes’ offerings for $1.99 each.