Sony PSP-290: The Sony PSP Gets Its Own GPS Receiver Accessory

Someone at the briefing was able to secretly snap a quick photo of a slide detailing the PSP-290. According to this blurry photo, the tiny silver PSP-290 will attach to the top of the PSP. The unit will have a 1-second update rate and take about 40 seconds to get its first reading when you first turn it on (cold start). The PSP-290 is slated for release sometime in October 2006. No prices were mentioned in the briefing. 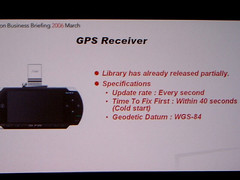 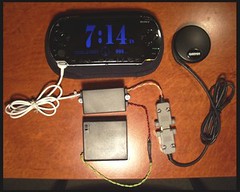 If you can’t wait until October, you can try to make your own PSP GPS unit like a PSP homebrew genius named Art. He created a PSP homebrew GPS system (photo on right), called GPSP, by hacking together a Garmin GPS unit with some PSP graphical navigation software. The GPSP software reads the GPS location data and then displays it on the PSP screen.

Art recently made some refinements to his PSP GPS creation and had this to say on QJ:

“There is a parts list in the new package, the position fix data is now extracted from an NMEA sentence common to the Garmin and the Sony unit from eBay, the new circuit has no need for the 4.7K resistor tied to +5 Volts because the MCLR is turned off in the pics software. The current limiting resistor is now 22K to better protect the PSP. this is the highest value I tried where it still worked reliably, There are small improvements and bug fixes to the software. The GPSP-V2.zip package is complete, and the original package should be discarded. Cheers, Art.”

FacebookTweetPinLinkedIn
Category: Uncategorized
Previous Post:Party with the Denon AVR-1906
Next Post:Teen’s iPod Was Struck By Lightning While He Was Mowing The Lawn