How To Play Spacewar – The World’s First Computer Video Game

In 1962, a group of MIT programmers and spent about 200 hours creating the world's first video game called Spacewar for a computer called the DEC PDP-1. 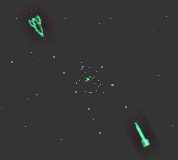