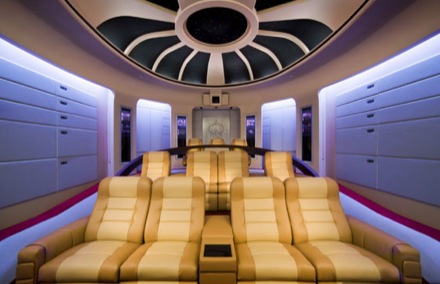 Someone thought it would be a good idea to model their home theater after the Enterprise NCC-1701D from the 1960s Star Trek spinoff, Star Trek: The Next Generation. The result is super geeky, but actually rather cool. Named the best theme theater installation at CEDIA 2007, this Palm Beach County, FL home features motion-activated air-lock doors with series sound effects, and a “Red Alert” button on the Crestron TPMC-10 controller to turn all of the LEDs bright red and flashing. The system also features “one of the largest Kaleidescape hard-drive based storage systems” ever created, amassing eight servers with 3,816 DVDs.