Talk about bad timing. A Twitter account named @NRA_Rifleman posted this controversial tweet just hours after the tragic Batman movie shooting in Colorado. The tweet lightheartedly asks gun aficionados to share their weekend plans. Unfortunately, the weekend plans of many people connected to the tragedy involve funerals and memorials.

At the time of this screenshot, 293 people had responded to the @NRA_Rifleman Twitter account questioning the timing of this tweet: “Good morning, shooter. Happy Friday! Weekend plans?” Some of the outraged tweeters are listed here in this blog post below. 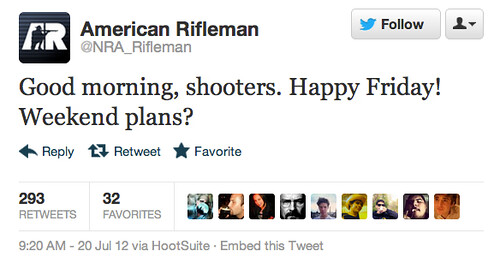 @nra_rifleman : GMS Happy Friday? The level of disconnect here would be appalling, if it were any other organization?

Was this tweet insensitive, or is everyone just being overly sensitive after the #ColoradoShooting?

Preventing Drunk Driving with the iPega iPhone Breathalyzer
Next Post: Generation Z Kids Don’t Understand How To Use 1980s Technology