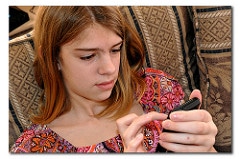 Michael Johnson, one of MethodShop‘s readers, sent us this note:

“I thought MethodShop might find this interesting. I was talking to my 16-year-old last night and she said her high school friends are abandoning Facebook and moving to Twitter. This is surprising because last year Twitter was considered “lame” by her friends but now it’s the cool way to communicate. Is this a trend or just a random occurrence at one high school?”

Excellent question. Is increased Twitter use a growing trend with teens? Mobile has been a major driver for Twitter, and who is on their phone more than a teenager? Obviously Facebook is available on mobile too, but the simple text/IM style of Twitter is very appealing to teens. Justin Bieber‘s popularity of Twitter is also another indicator of teen adoption of Twitter. He currently has 28M+ fans.

Tweets Are Based on Text Messaging

And there’s no denying that teens love to text message. A recent infographic by OnlineSchools.com, claims that the average teens sends an astonishing 3,417 text message every month. In case you’re wondering, that breaks down to 7 text messages per waking hour. At its core, a tweet is just a text message. Twitter was text message based before apps existed. They both even have 140 characters.

Here’s some more data to think about. According to this Pew Research Center study, teenagers are the second biggest age group using Social Media and half of all Twitter users access the service using a cell phone.

So what does all of this mean? Is Twitter benefiting from teen’s love for text messaging and mobile communication? What social network do you think teens prefer: Twitter or Facebook? Leave a comment below.

Is A Bacon Shortage Coming? Here’s What You Need To Know.
Next Post:Is Internet Explorer still your default web browser? Why?