Twootles: Search Google and Twitter At the Same Time

It’s probably only a matter of time until Google integrates Twitter tweets into their search results. But until that day comes, there’s Twootles.

Twootles a simple but web service that let’s you search on Google and Twitter at the same time and will displays both results side-by-side. That’s all that Twootles does right now but the developers promise that more features are on their way. You can give Twootles a try at twootles.com. 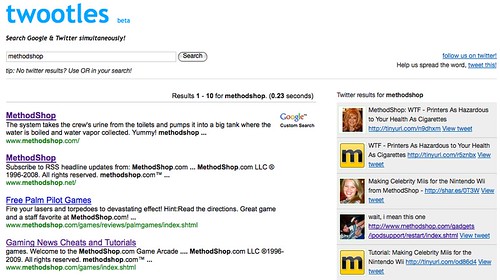 Still not sure what this “Twitter” thing is all about? This methodshop.com tutorial might shed some light on your problem.