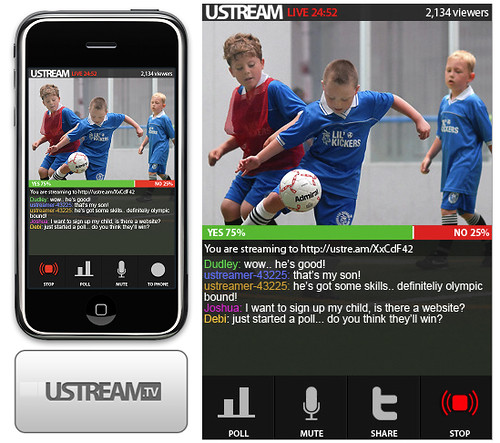 Can’t be face to face with your friends and family this holiday season? No problem. Just grab your iPhone and broadcast yourself. Thanks to a new free app called Ustream Broadcaster, iPhone 3GS users can now broadcast live video over both WiFi and AT&T’s 3G network.

“This is the first live broadcaster ever available in the App Store, bringing the ability to broadcast live to anyone,” said Dr. Gyula Feher, Ustream’s founder on the company’s blog. “From birthday parties, kids’ sports games and baby’s first steps to your latest vacation, this app enables anyone with an iPhone to share important moments with family, friends and more.”

The app not only works on older iPhone 3G models, but it enables a video recording work around. Apple hasn’t updated older iPhones with software that would allow them to record video. But in addition to streaming capabilities, Ustream Broadcaster lets iPhone 3G users record video straight to their iPhones.

You can download Ustream Broadcaster from the iTunes App Store here.

Moving In Philadelphia Is A Pain: 5 Tips For Moving Into And Out Of Philadelphia
Next Post:Ziggy Marley’s Music Mixer iPhone App