Where Did The Easter Bunny Come From And Why Is It Connected To The Resurrection Of Jesus Christ?

Where did the Easter Bunny come from? Here's the strange story on why the Easter Bunny was hatched by America's German immigrants in the 1700s and how this folkloric figure became the international symbol of Easter.

Every year Christians celebrate the resurrection of Jesus by searching for colorful eggs hidden by a rabbit. But why? Where did the Easter Bunny come from? The Easter Bunny isn’t mentioned in the Bible and rabbits don’t lay eggs. It doesn’t make any sense, or does it? Here are the weird and unbelievable reasons why Christians observe Easter with chocolate, bunnies and eggs.

Don’t worry, you didn’t miss anything in Sunday School. A magical bunny that delivers chocolate eggs is not mentioned in The Bible or any other religious scripture. There isn’t even a vague reference of an Easter Bunny or a creature delivering gifts to celebrate Jesus rising from the dead. So where did today’s modern Easter Bunny traditions come from?

The Connection Between Christianity And Rabbits

Rabbits have been associated with fertility for centuries. The hare’s ability to easily reproduce has always amazed humanity. As far back as Pagan society, Eostre, the Pagan goddess of fertility, was symbolized as a rabbit. During Medieval Times, Rabbits reproduced so freely, it was widely believed that they were hermaphrodites.

The symbolic connection between fertility and rabbits jumped from Pagans to Christianity, and the hare became a popular theme in Christian church art.

The ability to reproduce without loss of virginity led many religious leaders to associate the hare with the Virgin Mary. Through the years, rabbits were often depicted in the boarder decorations of religious illuminated manuscripts and in paintings of the Virgin Mary and Baby Jesus.

NERD NOTE: One of the most popular depictions of rabbits in the Christian religion is the Three Hares motif. The symbol shows three rabbits in a circular connected pattern and is commonly found in churches in both England and northern Germany. However, the origin of this ancient symbol of fertility can be traced back to the Buddhist cave temples of 6th century China. The Three Hares motif likely made its way to England via the Silk Road trade route, where it caught on with Christians already enamored by the connection between rabbits and the Virgin Mary.

The Connection Between Christianity And Eggs

Eggs have been used as symbols of fertility by many cultures and religions around the world, including Christianity. But it wasn’t until Medieval Times that Christian Europeans started correlating eggs to the resurrection of Jesus Christ. Early Christians made the egg a symbol of the resurrection and the empty shell a metaphor for Jesus’ tomb. The outside of the egg is dead, like a tomb, but new life is hidden inside.

Eventually, it became common practice to abstain from eating eggs during the forty-day fast of Lent between Ash Wednesday and Easter. The idea behind abstaining from something during Lent is based on a passage from The Bible from Luke 9:23. It reads, “Then he said to them all: “Whoever wants to be my disciple must deny themselves and take up their cross daily and follow me.”

NERD NOTE: As part of their Easter traditions, Orthodox Christians often decorate Easter Eggs by painting them red in memory of the blood of Jesus Christ that was shed during his crucifixion.

Why Eggs Have Symbolic Importance During Easter And Lent?

With many Christians abstaining from eating eggs during Lent, eggs became a prized commodity. Christians started painting them and children in England would even go door-to-door in their neighborhoods asking for these decorated eggs on the Saturday before Lent. The tradition spread to Christian populations around the world and wealthy Russians started exchanging ornately decorated eggs, some of them even jewel encrusted.

Why Is Chocolate Associated With Easter?

A more modern tradition is to give up sweets, like chocolate, during Lent. As a result, chocolate eggs wrapped in foil, or plastic eggs filled with chocolate or candy, like jelly beans, were added to Easter celebrations. Plastic eggs full of candy were more exciting for children and less fragile than real eggshells. As a result, the use of plastic eggs for Easter Egg hunts quickly grew in popularity.

Bringing It All Together: Rabbits + Eggs + Chocolate = The Easter Bunny

So where did the Easter Bunny come from? The exact origins of the Easter bunny are mostly still clouded in mystery, but it’s pretty easy to put all the pieces together.

A Reason To Celebrate: As Christianity began to spread across Europe, the Pagan celebrations of the vernal equinox began to merge with the observance of Christ’s resurrection. Since they both occurred around the same time, everyone had a reason to celebrate.

The Easter Bunny: The German’s get credit for inventing the idea of the “Easter Bunny”. They just combined what was already in front of them. Eggs and rabbits were already symbolically important in Christianity. With decorated eggs being a valued commodity among children, German Lutherans just took the next logical step.

Hiding Decorated Eggs: In the 13th century, some German Lutherans began observing “Osterhase” or “Oschter Haws” on Easter Sunday, where a bunny would hide decorated eggs for children. At first, the observation was more of a novelty. But when these German immigrants migrated to Pennsylvania in the 1600s, they took the Easter Bunny tradition with them where it grew without obstruction from European religious institutions. Without anyone to tell them “no” in the new world, the new Easter tradition flourished and was passed down through the generations.

Easter Choclates And Candy: And with more people giving up sweets during Lent, the addition of chocolates and candies, like jelly beans, became more popular than abstaining from eggs. The symbolism of the egg remained with the Easter Bunny tradition by filling plastic colored eggs with treats for children.

So where did the Easter Bunny come from? Germany. What does the Easter Bunny have to do with Jesus? It’s just a loose connection between the fertility symbols of rabbits and eggs in Christianity combined with abstaining from eating eggs during Lent.

Add a twist of decorated colored eggs and candy to help get kids excited on Easter Sunday and voilà, you have the Easter Bunny. Now you know the strange story of the Easter Bunny in the United States and why a bunny that hides chocolate eggs is connected with the resurrection of Jesus Christ.

Where Did The Easter Bunny Come From? – The Origin Of Our Easter Traditions #Easter #HappyEaster #EasterBunny #ChristianHistory #JesusChrist #Easter #EasterTraditions
Click To Tweet 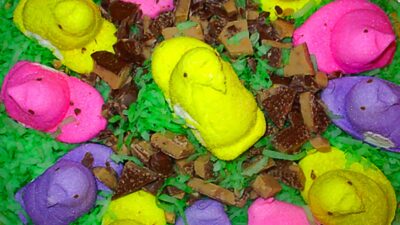 Marshmallow Peeps Pie: An Absurd Easter Dessert That Your Family Will Never Forget

Marshmallow Peeps Pie is an absurd pie made using leftover Peeps from Easter. This unique Easter dessert is kid-friendly and fun to make. Here’s our Peeps Pie recipe.

Eero Troubleshooting Issues Solved: Why Won’t My Eero Router Connect To My Older Devices?
Next Post:Jimmy Fallon Asked Twitter To Ruin A Movie With One Word – Here Are The 36 Funniest Responses