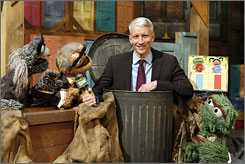 CNN’s Anderson Cooper, who stops by Sesame Street Oct. 16 for a “newscast” with grouchy anchors Walter Cranky and Dan Rather-Not, says he owes a huge debt of gratitude to the program for helping him learn to read when he was a child.
“I have a mild form of dyslexia, and I had a reading problem. So for me, Sesame Street was vital,” says Cooper, 40. “Beyond what I learned in terms of ABC’s and counting, the sense of how one deals with other people is something that I got early on from Sesame Street.”

Producer Carol-Lynn Parente says many celebrities — often those who have children — become interested in appearing on the program. “We get tons of requests, so we’re usually booked up long before the season starts. People have a fun time.”

NBC News anchor Brian Williams, 48, who guests Monday and reads the word of the day — squid — says: “I remember both of my kids, now teens, sitting in my lap clutching a bottle of milk and watching our favorite characters. To this day I have great affection for celebrities like Jamie Lee Curtis and Whoopi Goldberg, because they talked right to the children and didn’t try to be their adult selves.”

Although Sesame Street, like all media, faces intense competition in the marketplace these days, both Cooper and Williams say the show is in a league of its own. “I’m in a business that is an example of how sometimes the tried-and-true formulas are the best,” Williams says. “Sesame Street speaks to that adage.”