According to Macinstein & TVTechnoogy, Apple is pulling out of NAB this year. In years past Apple has always had one of the largest booths at the NAB (National Association of Broadcasters) trade show. Actually the last time I was at NAB, Apple’s booth was the best part of the show.

“Apple is participating in fewer trade shows this year. Often there are better ways to reach our customers. The increasing popularity of our retail stores and Apple.com Web site allows us to directly reach more than 100 million customers around the world in innovative new ways.” ~ Anuj Nayar, Senior Manager of PR at Apple

Adding insult to ingury, Apple’s main competitor in the broadcast industry, Avid, also pulled out of NAB. Looks like CES was the trade show to be at this year, not NAB. 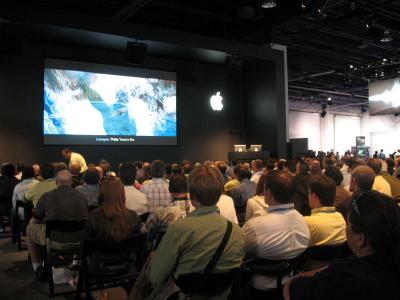 Dennis Wharton, from the NAB, confirmed Apple’s pullout on TVTechnoogy, but adds this confusing comment: “We’re talking about some on-site business opportunities with Apple.” I’m not exactly sure what that is suppose to mean.