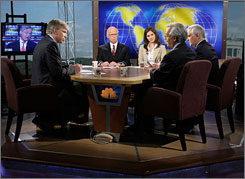 This financial crisis has really redefined the notion of “talking heads.” On business news channel CNBC, at any one time, 10 of them can be crowding the screen, to the point that it looks like a school picture come to life.
That’s one way the financial-oriented media is trying to capture attention and, during Wall Street’s turmoil, squeeze profits from gloom.

Now, 24 hours a day, there are television spots, blog posts and news sites all clamoring for investors’ attention. Some say that’s only adding to the market’s volatility by repeating ideas that often don’t deserve mention and giving credibility to sources who pump their own interests.

“What the 24-hour news coverage does is it creates the currency of momentum,” said Mark Collinson, a partner in CCG Investor Relations. “In the old days, you might have picked up the Wall Street Journal and read about something. Now it’s blasted at you 20 times by 5 o’clock.”

People are looking for answers. Do they hear only noise?

“If you watch television for anything other than entertainment, then you’re losing money,” said Barry Ritholz, CEO and director of equity research for Fusion IQ and author of Bailout Nation: How Easy Money Corrupted Wall Street and Shook the World Economy.

Whether propelled primarily by personal or professional investors — or merely the curious who are watching the market like a wild sporting event — CNBC is on pace to have its best month ever in daytime ratings. The Fox Business Channel, which has struggled to make its presence felt since being launched a year ago, hit the 100,000 mark in viewers a few times for the first time ever.

Fox Business decided one Saturday morning, with little promotion, to do a question-and-answer session about the market. Executives were stunned by the volume of phone calls and e-mails, said Kevin Magee, Fox executive vice president in charge of the network.

The popular business blog The Big Picture, run by Ritholz, has seen its traffic double, and CNNMoney.com had a record-setting September.

“People make money on the way down, too,” said Mark Hoffman, CNBC president. “As we have seen, one person’s bad news in business is another person’s good news.”

CNBC’s screen of talking heads was the butt of a few jokes. The network’s Mad Money host Jim Cramer drew more serious attention about the impact of TV analysts on behavior when he appeared on NBC’s Today show Oct. 6 to urge people who might need money during the next five years to take it out of the stock market “right now.” His personality gave the remarks outsized attention at a time investors were jittery.

Fox Business went on the attack, running ads saying that it was part of a pattern of bad advice offered by Cramer. Hoffman said Cramer, who also advised investors who have no immediate need for the money to let it ride, was giving the same recommendation as most financial advisers.

Through two weeks, at least, Cramer’s advice was sound: The Dow Jones industrial average closed at 10,325 the business day before Cramer talked on Today, and was at 9,122 at noon Tuesday.

Another reporter given considerable face time during the crisis, CNN’s Ali Velshi, was criticized for stepping over the line into advocacy with his coverage of the government bailout plan, which he supported.

The general news networks have kept a small box on their screen all day to track the Dow’s ups and downs, competing for attention with presidential politics. The intense coverage means that the casual investor now knows the importance of markets in Singapore, London and China — usually just the province of the professionals.

“The information age has profoundly changed the way information moves, the way money moves around the world,” Hoffman said. “We’re seeing that play out today in a way that we never have before.”

Collinson said he believes the constant news cycle has the potential to increase volatility in the markets.

For the average folks watching, a blizzard of punditry can reduce complex situations into something too simple, he said. He’s also suspicious of the credentials of some analysts, wondering how much of their analysis is motivated by self-interest.

“If people knew (what’s going to happen in the markets), they certainly wouldn’t come on the news and tell everyone else,” he said. “They’d do what they need to do based on that knowledge and then retire to Bermuda.”

CNBC, which says it is running an investor-driven network rather than a general business news channel, has consciously increased the number of analysts it has on the air. It put out a general call late last week for CEOs to contact the network and offer their perspectives on what’s going on.

Ritholz said he’d find it more valuable for a network to bring on someone particularly smart, like wealthy investor Warren Buffett or former U.S. Federal Reserve Chairman Paul Volcker, and have him talk for an hour.

His company has turned the office TVs off, finding they were creating a distraction.

David Kotok, chairman and chief investment officer of Cumberland Advisors, said he understands a network’s first priority is to win viewers. He has been one of the featured people on CNBC’s multiple boxes of talking heads, and said he doesn’t bother trying to talk over people in that situation.

The intense media coverage either heightens volatility or is neutral, he said. “It’s hard to imagine it has a dampening effect,” Kotok said.

CNBC’s Hoffman says there’s nothing wrong with giving viewers as many points of view as possible.