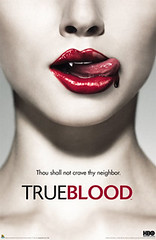 Are you a fan of HBO‘s hit show True Blood (aka a Trubie)? EVERYTHING about the show is clever. The writing is amazing. The production is movie quality. Even the marketing is amazing. So when I saw a SXSW 2011 panel called “Fan to Fanatic: True Blood’s Marketing Hook,” it was one of the first sessions I added to my schedule. Apparently I wasn’t the only one. Ballroom E of the Austin Convention Center was standing room only to hear what Stall Wiggins (TODO Austin), Liz Henderson (Nice Girls Media LLC), Mike Monello (Campfire), Sabrina Caluori (HBO), Todd Brandes (Digital Kitchen) and Zach Enterlin (HBO) had to share about the marketing strategy that has made “True Blood” the vampire phenomenon that it is today.

To kick off the panel, Zach Entlin (HBO) shared with the crowd how “True Blood” and HBO came together to create some of the most successful marketing campaigns ever for a tv series. 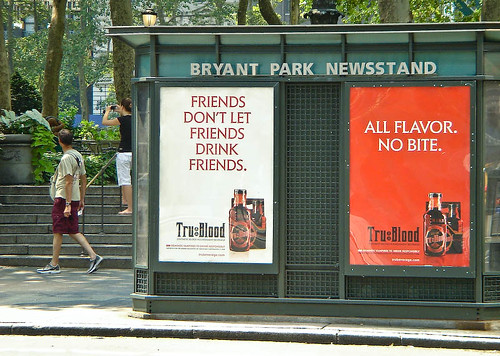 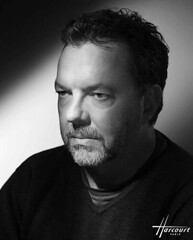 The starting point… Alan Ball, the creator of “True Blood”, laid out a pretty specific plan that focused on the viewers and he wanted to do it in a big way. He wanted to do something that hadn’t been done… something with true engagement… something beyond the 0:30 spot. With his vision, a campaign was born that included the motto “Friends don’t let friends drink friends”.

Mike Monello of Campire, shared how the Season 01 campaign “Vampires live among us” was born. The idea that vampires live amongst us was pretty compelling (not to mention a bit frightening) and the campaign had wild success.

So successful that Todd Brandes of Digital Kitchen shared the vision for extending the campaign into Season 02. And a new target audience was born… Vampires! And why not, if they live among us, than why not market to them?! Duh.

Realizing early on that “True Blood” fans wanted to engage, and at times take on the role of the characters, Sabrina Caluori (@sabrinacaluori) of HBO’s digital team discussed the extended content experience online and in social media. “We tried to think about treating fan sites as media and to give them access in a way that hadn’t been done prior to this show.”

Fans were eating it up (insert bad joke here)!

Liz Henderson and the team at Nice Girls Media jumped on the chance to empower fans via true-blood.net. From the podcasts to the sweepstakes for fans to create their favorite “true blood” beverage (alcoholic and virgin recipes accepted), the online extensions let the fans stay connected to the “True Blood” phenomenon. The watermelon candied blood viles were also quite tasty.

The creators and marketers of “True Blood” built a rabbit hole. And the deeper the rabbits went down the hole, the more they found. From the creative that hacked reality and spoke to the vampires living among us, to the opposing web sites for the American Vampire League and Fellowship of the Sun, to merchandise ranging from Lafayette’s ‘L’ necklace to Sookie’s Merlotte’s apron… “True Blood” was running through everyone’s veins creating fanatics everywhere.

This is an impressive group… not to mention an impressive television series. If you’re not a fan of “True Blood” than you obviously haven’t seen it.

“True Blood”, for mature and thirsty audiences only.