According to Gizmodo, Apple is set to unveil the 3G iPhone on June 9 at the company’s Worldwide Developers Conference (WWDC) in San Francisco.

“We all suspected it, but now it is confirmed: someone very, very close to the 3G iPhone launch has told me [Gizmodo’s Jesus Diaz] that Apple will announce their new model at the WWDC Keynote on June 9th. The second-generation iPhone will be available worldwide right after the launch, and not at year’s end, as previously thought. The new model will also herald new sales policies in some countries.

In Spain, for example, the 3G iPhone will be available for sale at the June 18th grand opening of Telefonica’s megastore—an Apple Store-like shop located in the company’s historical building in Madrid’s Gran Vía— with nationwide availability the next day or after a few hours. The other European countries with iPhone availability will have similar launch schedules.”

The 3G iPhone will also supposedly do away with fixed-price iPhones. Apple will be adopting a more traditional subsidized pricing model. This means that certain carriers can offer discounts and subsidies on the Apple handset. This also means that large companies will probably be able to purchase iPhones in bulk and offer them as part of their companies internal wireless plans. 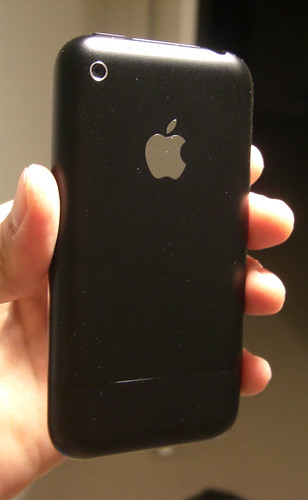 What will this new 3G iPhone look like? Rumors say it might come in multiple colors including black (see a mockup above). There’s no doubt that a black 3G iPhone would be extremely popular.

Apple CEO, Steve Jobs, first promised a 3G iPhone at a London press conference in September 2007. Sine then, it’s been a guessing game trying to figure out when the 3G iPhone would be released. In April, hackers found a 3G toggle switch in the iPhone’s 2.0 beta firmware hinting that a 3G iPhone release was imminent.